Democrats: we will lower health care costs by jacking them up 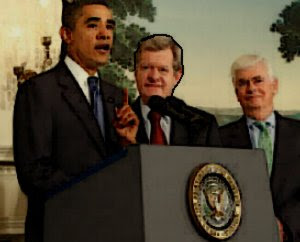 Tomorrow's edition of The Wall Street Journal reports that a compromise heath care overhaul bill is in the works.

Among the methods that Democrats intend to use to fund the plan: new taxes on existing insurance plans.

The committee needed to plug a $100 billion shortfall in the plan's budget over a decade, and Mr. Baucus assembled a combination of spending changes and revenue increases to make up for the gap, according to people familiar with the proposal. The main new item is an across-the-board fee placed on insurance companies that is estimated to raise tens of billions of dollars over the next decade...

For years, Barack Obama has pointed to rising health care costs as the rationale for a sweeping overhaul of the entire medical industry.

So the Democrats answer is to dramatically raise health care costs for the average American family that already has insurance by assessing new fees and penalties on insurance companies.

To call the Democrats' health care message incoherent is to give them far too much credit.

The sixties retreads that control the current Democrat leadership need to stop dropping acid for a couple of weeks so they can craft a message that actually sounds like one of their traditional lies.