It turns out last month's decision by the White House to leave out Fox News Sunday when the president made the rounds of Sunday shows was part of a larger campaign launched against the cable news network.

"The reality of it is that FOX News often operates almost as either the research arm or the communications arm of the Republican Party," Dunn said. "And it's not ideological. Obviously, there are many commentators who have conservative, liberal, centrist, and everybody understands that. But I think what is fair to say about FOX and certainly the way we view it is that it really is more a wing of the Republican Party."

"It really is not a news network at this point," Dunn said...

To their credit, some liberal media outlets are pillorying the Obama administration for maintaining a very public enemies list.

• The Nation calls Obama the "Whiner-in-Chief." 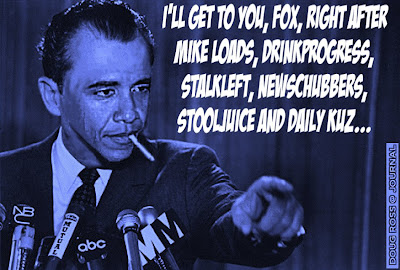 • The Huffington Post says the administration has "been met with a surprising backlash."

• The Baltimore Sun's David Zurawik wrote in the Baltimore Sun that Dunn was wrong and dangerous, to boot: "I have to say I was surprised to hear a senior White House staffer sounding so uninformed and blatantly biased. This campaign by the Obama administration is dangerous to press freedom, and it should concern everyone in the press."

One assumes they also approved of Nixon's enemies list.