Based upon several reliable reports at RedState, it would appear that Virginia's GOP establishment changed the rules of ballot access just last month. Front-runner Newt Gingrich, for one, saw his campaign hurt badly by reports that it bungled the Virginia ballot process. He and Rick Perry were excluded despite each turning in over 10,000 signatures. But if the new reports are true, the state GOP has a hell of a lot to account for. 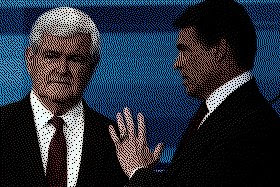 ...the very short version is that the VA GOP only certified Mitt Romney and Ron Paul for its primary ballot. Rick Perry and Newt Gingrich both had too many signatures tossed; Jon Huntsman, Rick Santorum, and Michele Bachmann didn’t even try. Of the seven candidates, one (Romney) had more than enough signatures (15K) to bypass the verification process entirely. All of this has caused a lot of agitation among Republicans following the primary process, of course; and not just from people who disapprove of what the VA GOP has done...

One small problem with that: as Winger argues, the rules were allegedly drastically changed. In November of this year.

...prior to the 2012 elections it was Republican party policy in Virginia to simply deem any candidate that brought in ten thousand raw signatures as having met the primary ballot requirements under Virginian state election law.

Under these rules, of course, both Newt Gingrich and Rick Perry would have qualified easily.

And why did the rules change? 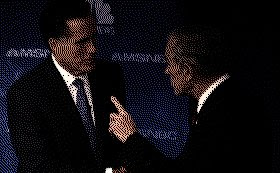 ...On October 24th independent state delegate candidate Michael Osborne filed suit against the Republican party of Virginia [challenging the signature review process and who performs it] ... according to Winger the VA GOP decided in response to bump up from 10K to 15K the threshold for simply deeming the requirements as being met.

...I think that John Fund’s general comment is correct: this is going to go to the courts. John was not discussing this specific wrinkle, but his larger point that Virginia’s ballot access policies have systemic problems gets a big boost when it turns out that the state party can effectively increase by fifty percent the practical threshold for ballot access – in a day, and in the middle of an existing campaign.

...If it is true that the Republican party of Virginia decided in November of 2011 to increase the threshold for automatic certification from 10K to 15K, then it is reasonable to suggest that this was a change that unfairly rewarded candidates who had previously run for President in Virginia.

Lane asserts that the state GOP has ultimate control of the ballot and could, if pressed, decide to certify Gingrich and Perry.

Either way, the issue is going to the courts.

And, either way, the Virginia GOP looks incompetent... or ill-intentioned against conservative candidates.

Action Alert: I urge you to contact the Virginia GOP and demand that they include Gingrich and Perry on the ballot. Be polite, but firm. There's no excuse for issuing new rules at the last minute that just happen to exclude the leading candidates. In fact, it's an outrage.

It has come to my attention that a rule change which has caused candidates Perry and Gingrich to be disqualified from the VA state ballot occurred just last month. Such last minute changes and subsequent disqualifications truly smack of impropriety. Rather than drag this process to the courts, for the good of the GOP and the integrity of the voting process, I strongly urge you to reconsider this rule change and certify these candidates. Please let the voters decide – leave legislating by executive fiat to the democrats.

There is no difference between these corrupt parties any longer. It is all about power and stealing every buck possible from us. Throw every damn one of these bums and crooks out.

The party may have changed the rule on who automatically gets certified, but the law requireing 10000 signatures isn't new and didn't change, and Newt didn't have enough. I don't know how changing a party rule gets around the law. (I guess I shouldn't be surprised that the party will try to avoid the law - as Mt. Top Patriot said, the political party is corrupt).

Where is the proof that this rule has changed? Many folks are screaming it but there is no citation or proof that anything has changed other than heresay.

BTW, the process has been known for YEARS. Rules state 10,000 signatures. If you're hoping for a "yeah, we'll take whatever" waiving of the rules to get by, that's kinda a lot like cheating. Is that what we want in a President?