Is Iran the key to Obama's reelection? [Dan from NY]

Concerning Iran and its nuclear weapons program, I’ve contended for years that a) it’s (still) vulnerable to attack; b) Iran’s threatened reaction would be much less damaging than advertised; c) the U.S. military -- and only the U.S. military -- could get the job done using unmanned stand-off weapons; d) the strongest incentive for Obama to move would be unambiguous signals from Israel that she would (and could) go it alone if necessary.

Now, in light of these statements recently made by Defense Secretary Panetta, I am adding e) a successful US-led operation would virtually guarantee Obama’s reelection.

Panetta: Iran will not be allowed nukes 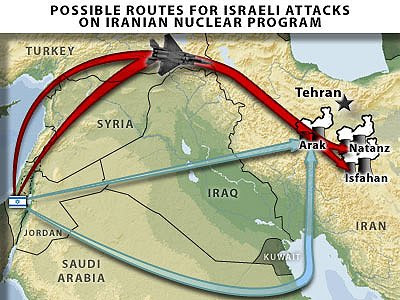 The U.S. Secretary of Defense said Monday night that Iran will not be allowed to develop a nuclear weapon. In an interview, Leon Panetta, said despite the efforts to disrupt the Iranian nuclear program, the Iranians have reached a point where they can assemble a bomb in a year or potentially less.

Secretary Panetta spoke with us at the end of an overseas trip during which he reviewed strategy in Afghanistan and formally ended the war in Iraq.

CBS News anchor Scott Pelley caught up with Secretary Panetta on his tour last week of Iraq, Afghanistan and Libya. On the way home, he boarded the jet nicknamed "The Doomsday Plane." This is the command post where he and the president would direct a nuclear war. In an interview for "60 Minutes," we sat down in the compartment where he would execute the commander-in-chief's orders. Panetta told CBS News that Iran needs only one year to build a nuclear weapon.

Pelley: So are you saying that Iran can have a nuclear weapon in 2012?

Panetta: It would probably be about a year before they can do it. Perhaps a little less. But one proviso, Scott, is if they have a hidden facility somewhere in Iran that may be enriching fuel.

Pelley: So that they can develop a weapon even more quickly...

Panetta: On a faster track....

Pelley: Than we believe....

Pelley: If the Israelis decide to launch a military strike to prevent that weapon from being built, what sort of complications does that raise for you?

Panetta: Well, we share the same common concern. The United States does not want Iran to develop a nuclear weapon. That's a red line for us and that's a red line, obviously, for the Israelis. If we have to do it we will deal with it.

Pelley: You just said if we have to do it we will come and do it. What is it?

Panetta: If they proceed and we get intelligence that they are proceeding with developing a nuclear weapon then we will take whatever steps necessary to stop it.

Perhaps Obama really is willing to go to war to stop Iran in the hope that it guarantees his reelection.

In any event, there are at least two reasons for Americans to support such an attack: (a) it's the right thing to do; and (b) the foaming-at-the-mouth, radical Left (and the Paul-bots) will go stark-raving mad.

At the moment, the only October Surprise that's going to change the result is a wildcard canditate on the GOP side that people actually want to vote for.

If Obama doesn't, the successor republican president will have to.
If Obama were a decent man who loves his country, he'd order the attack after the election before his successor is sworn in, in consultation with his successor.
(Sorry, I love my country and am always optimistic)