Tom White has an exclusive that could be an important development in Virginia's ongoing GOP soap opera:

I know that it is highly improbable that I am the only person in the country that has actually read the Code of Virginia on Presidential Primaries, but the requirement that signatures also include an address IS correct for a statewide election, but not for a Presidential Primary, though the number of signatures are identical.

Anyone know an election attorney available on Christmas? 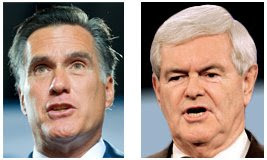 Various reports have stated that the signatures turned in by Newt Gingrich included at least 2,000 that were invalidated because there was no address given with the signature.

If this were a Virginia Statewide office, that would be correct. But this is a Presidential Primary. And while the rules are similar, they are actually addressed in two separate sections of the Virginia Code.

There is a requirement in a Statewide General Election that the address be included, but there is no such requirement for a presidential primary. The number of signatures are the same, 10,000 and 400 per Congressional District. But the address requirements are different.

Tom suggests that Gingrich and Perry request that the signatures excluded for lack of address be reinstated and a recount be initiated.

If this report pans out, it could be another huge story attributed not to legacy media, but to what I like to call the new mainstream media.

at 11:55 AM
Email ThisBlogThis!Share to TwitterShare to FacebookShare to Pinterest
Labels: Gingrich, MSM, Perry, Protecting America

Interesting. Thanks for the information. A little manipulation by Virginia GOP? Narrow the playing field so their pick (Romney) has a better chance? Or an honest mistake?

Very interesting indeed!!! This whole saga, just seems to have a stence to it, IMHO.

Romney SHOULD take a BIG HIT if his lackey's were behind this. Time to take the gloves off Newt! And if you still want to play nice announce Palin as your VP and let her finish Mitt with her usual plain spoken common sense truth.

GOP Establishment is afraid of another reagan-Like revolution. Gotta help Willard!! Pitiful and very transparent. I suspect Newt will fight and win this battle.

nah.. how about calling it the Real News Media..?