Rep. Joe Walsh: Prepare for the Race Card to Be Played As Never Before

Because of President Obama's litany of failed domestic and foreign policy initiatives, we already knew that the 2012 presidential campaign was destined to be the dirtiest in history.

Mr. Obama simply can't run on his record, given his failed Stimulus, an incredibly unpopular takeover of the health care industry, dozens of crackpot "housing recovery" programs, Cash-for-Clunkers, green jobs scams, the takeovers of GM and Chrysler that abrogated bankruptcy law, and the rise of an Islamist Middle East, to name but a few.

So the billion dollars he and David Axelrod plan on raising for 2012 will be spent -- literally -- tearing down his opponent in every way imaginable. It's the Chicago way.

And Rep. Joe Walsh, a Republican from Obama's home state, has some additional predictions for the campaign.

Rep. Joe Walsh (R-Ill.) says the Obama administration has shown a pattern of accusing its detractors of being racists, and said he’s afraid the president will use such accusations in the 2012 election to stymie criticism. 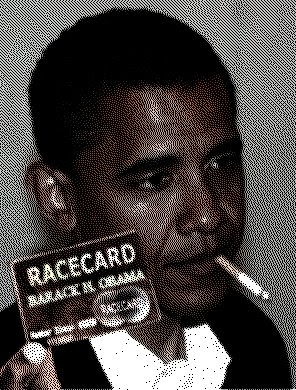 “We’ve seen this behavior with this president where he’s gently and sometimes not-so-subtly thrown out the race card,” Walsh said.

Speaking on Thursday to the National Rifle Association, Walsh was discussing Attorney General Eric Holder’s recent comment that the “more extreme segment” of his critics were going after him as a way to get at the president, because “we’re both African-American.”

“The minute you say, 'They’re criticizing me because I’m African American,' or whatever, that is voter intimidation... You are trying to stifle honest debate, and my fear is this is going to happen again in the next election. We saw it in ’08; thankfully, the president now has a record — he didn’t have a record in ’08 — so now we can criticize the fact that he destroyed the economy, and hopefully we can do that without being accused of being racist.”

Walsh also reiterated his claim that when Holder played the race card, it was part of an “orchestrated” effort by the administration to silence its critics by branding them racists.

“I can say something like, ‘This president in many ways had no business getting elected; he’s in over his head,’ and when I say something like that, often I’m accused of racism,” Walsh said. “When his attorney general sort of sings along the same tunes, you have to wonder if this is some, you know, orchestrated strategy of theirs, because they know they’ve got a media that will protect them every single day.”

Walsh called the behavior “shameful,” and said the media was complicit with the administration in pushing the storyline.

“This isn’t unusual,” he said. “When the left runs out of arguments and can no longer defend a position, they will often throw out the race card. This administration has done it, this president has done it, and Eric Holder is no different.”

Personally, I feel Rep. Walsh isn't giving the Democrat Party enough credit. It generally strives to maintain the most ethical debate positions, always arguing on principle, and never resorting to underhanded tactics like name-calling and slurring critics as racists.