Outrage over West's Goebbels remark (Obama likening the U.S. to Nazi Germany on NPR remains in memory hole, however)

Please consider this report from The Hill:

Rep. Allen West (R-Fla.) landed in hot water on Friday for his remarks the previous day comparing the Democrats’ proficiency in getting out their message to the notorious head of the Nazi Party’s propaganda department under Hitler.

“If Joseph Goebbels was around, he’d be very proud of the Democrat Party, because they have an incredible propaganda machine,” West said Thursday... “Shame on him,” tweeted Rep. Steve Israel (D-N.Y.). “Rep. West needs to apologize now for insulting the memories of the millions who lost their lives during the Holocaust.”

Curiously, these Democrat hacks were utterly silent when then-candidate Barack Obama was revealed to have compared the United States to Nazi Germany during an NPR interview. 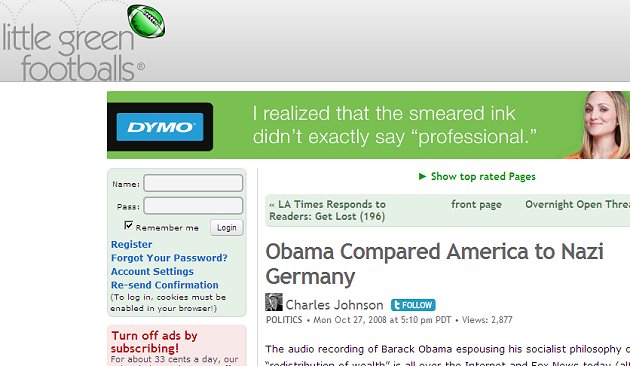 None other than Charles (or the "Chuckster", as he prefers to be known) Johnson of LGF -- then in the patriotic phase of his career -- discovered Obama tarring America as a fascist regime.

Countdown to media analysis of Obama's egregious statements in: 3... 2... never.

West was refering to the type of propaganda, and not the Nazi's themselves! Curiously, these people asking for an appoligy were utterly silent when then-candidate Barack Obama was revealed to have compared the United States to Nazi Germany during an NPR interview.

Link doesn't work or ....has been shrubbed clean.

What a double standard when it comes to Allen West! Where was The Anti-Defamation League’s outrage … the liberal outrage … in January when Rep. Steve Cohen made the exact same Joseph Goebbelse comparison in reference to the Republicans.