No Offense, But Republicans Can't Be the 'Stupid Party' With Nancy Pelosi Saying Stuff Like This

She also said that the money from unemployment benefits creates a “safety net” for the U.S. economy because it “injects demand into the economy -- creating jobs.” 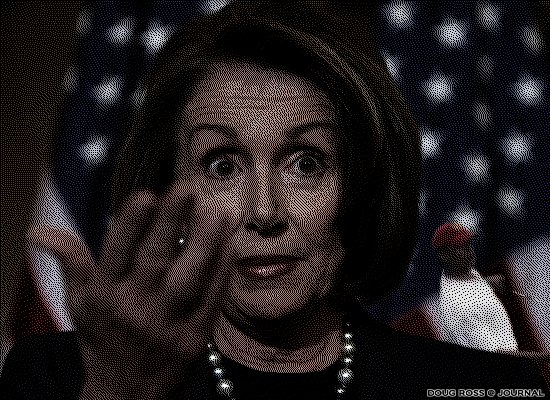 ...“The unemployment insurance extension is not only good for individuals. It has a macroeconomic impact. As macroeconomic advisers have stated, it would make a difference of 600,000 jobs to our economy.”

Pelosi did not name those “macroeconomic advisers.”...

Of course not, because those -- ahem -- advisers' names all start with the letter K and end with rugman. You know, the same nincompoop who was lauding Europe's economic model just two short years ago.

Sorry, folks, RINOs are plenty dumb, but they can't compete with this trio of Democrat leaders:

• Harry Reid -- a man with a truly feeble, if not failing, mind. Each day he seems more and more likely to give an incoherent, rambling speech (remember "cowboy poetry"?). For that reason, he is prohibited from speaking to the public without Chuck Schumer standing next to him, usually with a hand up the back of Reid's shirt like a ventriloquist.

• Nancy Pelosi -- a woman who's had so much work done on her face that her eyes appear ready to pop right out of her head -- has made tens of millions of dollars over the last few years thanks to insider trading crony capitalism savvy investing. And she's going to teach us how to create jobs.

• Finally, Barack Obama -- a man who has no transcripts from Occidental College, no transcripts from Columbia University, no transcripts from Harvard, no thesis papers, no law practice client list, no state senate records, and no ex-girlfriends -- but he's going to tell us how much electricity is going to cost, what kind of health care we should receive, what kind of cars we need to drive, how much our credit-card fees must be, why we shouldn't drill or refine oil, and why we should borrow trillions of dollars from the Chinese government to give to his public sector union boss buddies (hint: so it goes back into his reelection campaign coffers).

No, my friends, you can call the establishment Republicans many things, but only a claque with Pelosi, Obama and Reid in charge can be called "the Stupid Party".

By her logic, if everyone in the nation lost their job and went on the government dole, we'd have full employment and a booming economy. She's an idiot.

Remember when she said that the stimulus bill would create 500 million jobs in America?