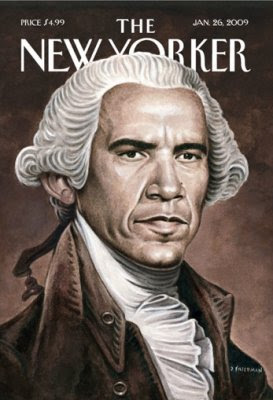 George Washington was the father of our country.

Eh! No big deal. Barack Obama is better...at least in his own mind. Such was the laughably absurd claim of President Obama on 60 Minutes last Sunday. What? You didn't see it? That was because 60 Minutes conveniently left it out of its broadcast...

KROFT: Tell me, what do you consider your major accomplishments? If this is your last speech. What have you accomplished?

PRESIDENT OBAMA: Well, we're not done yet. I've got five more years of stuff to do. But not only saving this country from a great depression. Not only saving the auto industry. But putting in place a system in which we're gonna start lowering health care costs and you're never gonna go bankrupt because you get sick or somebody in your family gets sick. Making sure that we have reformed the financial system, so we never again have taxpayer-funded bailouts, and the system is more stable and secure. Making sure that we've got millions of kids out here who are able to go to college because we've expanded student loans and made college more affordable. Ending Don't Ask, Don't Tell. Decimating al Qaeda, including Bin Laden being taken off the field. Restoring America's respect around the world.

The issue here is not gonna be a list of accomplishments. As you said yourself, Steve, you know, I would put our legislative and foreign policy accomplishments in our first two years against any president -- with the possible exceptions of Johnson, F.D.R., and Lincoln -- just in terms of what we've gotten done in modern history. But, you know, but when it comes to the economy, we've got a lot more work to do. And we're gonna keep on at it.

...One can only guess just how extensive the trademark Kroft look of bemused skepticism would have covered his face if, say, George W. Bush had made the same claim of presidential greatness. When Obama makes it, the laughable claim just gets edited out of the broadcast even though it was by far the highlight of the interview.

I think this nicely summarizes the bizarre worldview of the radical Left and legacy media. But I repeat myself.

Mr. President, NEVER say that sort of thing when I'm sipping a soda in front of my PC monitor!! That's gonna take forever to clean off...!

The funny thing is this: No future
POTUS will ever compare himself to Obama.....

Forth of the worst is even a stretch.

The sad part is that millions of Obamadrones agree with him.