Harbinger of Future Events: New York Times Emails Millions of Subscribers to Tell Them Their Subscriptions Are Cancelled 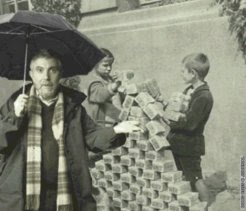 The New York Times mistakenly sent an e-mail on Wednesday to more than eight million people who had shared their information with the company, erroneously informing them that they had canceled home delivery of the newspaper.

The Times Company, which initially mischaracterized the mishap as spam, apologized for sending the e-mail. The people who received the message represented a cross section of readers who had given their e-mail addresses to the newspaper, said Eileen Murphy, a spokeswoman for the Times Company.

...The e-mail urged recipients to consider continuing their subscriptions to The Times at 50 percent off for 16 weeks. The message sent off a flood of Twitter reactions and calls to The Times...

...She said the e-mail had been sent by a Times employee and not Epsilon Interactive, a third-party service the company uses to communicate with subscribers.

I'm thinking this is just the first step in a self-fulfilling prophecy.

It was such a strange occurrence. I wonder if there is anything more to it. I also find it interesting that a week after, the Times sold off a large number of the smaller papers they own.