Guess what? It doesn’t matter. What we’re witnessing could be part of Obama’s plan or a byproduct of Obama’s negligence, and either way the results are still the same. Only three years into his first term and Obama has turned the Mideast and North Africa into a hotbed for sharia and political Islam (terms his administration has expressly forbidden). At the same time he's made the rest of the world much more unstable. Extrapolate, if you dare. Four more years of Obama... and you won’t recognize this place. Guaranteed.

Egypt: Islamists consolidate gains in 2nd round of parliamentary elections 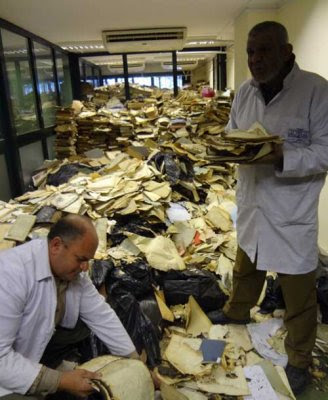 ...the Muslim Brotherhood says it won around 86 of estimated 180 seats up for grabs in the round, or 47 percent. The Al-Nour Party, the political arm of the ultraconservative Salafi movement, won around 20 percent of the vote.

The secular and liberal forces that largely drove Egypt’s uprising against former leader Hosni Mubarak were trounced, failing to turn their achievement into a victory at the polls. The secular alliance of Egyptian Bloc and youth Revolution Continues won less than 10 percent of the seats.

...A third round of voting is to be held Jan. 3-4. It is not expected to alter the result and could strengthen the Islamists’ hand.

...murders of peaceful protesters by Iran's vicious dictators
...murders of American evangelists by Somali pirates
...Iran's continual threats to wipe America and Israel "off the face of the Earth"
...murders of Christian Copts by "freedom-loving" Egyptians
...incessant rocket attacks by Hamas into Israel
...the continued build-out of Iran's nuclear weapons program
...the transit of the Suez Canal by Iranian warships in an outright provocation of Israel
...Iranian military personnel operating with impunity in Venezuela on missile technology
...a failed narco-terror state descending into civil war on our unprotected southern border

However, the president is willing to courageously speak out on:

...how our Egyptian ally Mubarak should leave office and/or stay but work on "an orderly transition"
...how Libya's rebels -- who turned out to be hard-core Islamists aligned with Al Qaeda -- are worthy of our military support
...and how Israel's construction of apartments in its capital city is a "provocation"


Image: The Fire at the Institut d'Egypte Cairo, by AncientWorld.