Results of Obama's Outreach to the Middle East Are In: Hamas Takes a Victory Lap [Dan from New York]

These Islamists are so clannish. With the fall of the secular dictatorships giving way to the rise of the Islamic variety, suddenly the welcome mat is out for Hamas throughout the Middle East. 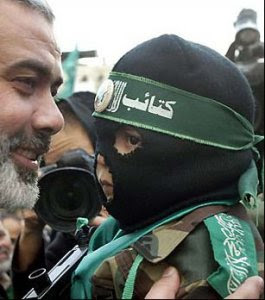 Buoyed by the rise of the Islamists to power in the Arab world, Hamas Prime Minister Ismail Haniyeh is planning a tour of Arab and Islamic countries – the first of its kind since his movement came to power in 2006. ...Haniyeh is currently considering visiting not only Qatar, but also Turkey, Bahrain, Tunisia and a number of Arab countries. He pointed out that Turkey had also invited Haniyeh.

On Sunday, Haniyeh phoned the emir of Qatar to congratulate him on the emirate’s independence anniversary. During the conversation, Haniyeh invited the emir to visit the Gaza Strip... the emir has accepted the invitation, saying it was a “national duty to go to the Gaza Strip under the current circumstances.” However, no date has been set for the visit, Rizka added.

Qatar is one of the few Arab countries that openly support Hamas. Hamas leader Khaled Mashaal has visited Doha several times in the past few years.
Haniyeh also phoned the king of Bahrain and the crown-prince of Saudi Arabia and thanked them for their ongoing support for the Palestinians, the Hamas advisor said.

There's more than one way to throw Israel under the bus, isn’t that right Mr. Obama?

Many decades from now, when the history books are written, the "Obama Doctrine" -- such as it is -- will be described as the lynch-pin of the Islamist overthrow of the Middle East.