Truth be told, this isn't the real photograph that accompanied the news story. It's just one I found online. But, c'mon, you could easily imagine this happening:

Car described as a fuel saver, but also a little pricey (Ed: and sometimes quite warm)... 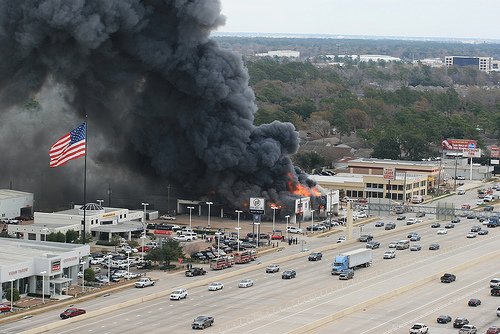 ...The Edmunds.com Web site called the 2012 Chevy Volt "arguably the most fuel-efficient car on the market, but it's pricey for what you get."

Contrary to what its name suggests, the Volt is far from an all-electric vehicle. It is powered by a 149 horsepower electric motor that relies on a lithium-ion battery pack until the battery charge nears depletion. A four-cylinder internal combustion engine then kicks in and replaces the battery pack in generating power for the electric motor. A fully charged Volt can travel about 35 miles before it begins using gasoline at a rate of about 40 miles per gallon, according to the EPA.

The battery can be recharged in about four or eight hours, depending on whether it is plugged into a 120-volt or 240-volt charging outlet.

The Volt's introduction to the region has been accompanied by a wave of news stories reporting an investigation by the National Highway Traffic Safety Administration into potential fire hazards linked to the Volt's battery pack. The agency reported two fires and an incident of smoke and sparks stemming from safety tests conducted by regulators this year... The agency added that Volt owners who have not been in a serious crash "do not have reason for concern."

And since each Volt appears to cost American taxpayers roughly $250,000 apiece in various subsidies to GM, a buyer is truly getting a heck of a deal for that $40,000.

Headline and picture are precious!!!

Absolutely loved the caption and pic.

Your description of the Volt is still a little too admirable. You cannot buy one here in the range you quoted. Much closer to 50k. dealers have actually stolen the tax credit selling them back and forth.

They do not get 40mpg either. Only when you include the gas free electric charge in the overall tank consumption do they get close to that.

My elantra gets 40 MPG with a bigger motor, bigger interior and more equipment. Oh yea...and it cost 30 grand less and doesn't explode.

Vy must mericans do this? Put batteris in Zaporozhets! DONE. If you still want Kabluey, tailgate a Pinto.

Baby is on fire.

Darn, now I've got to clean the wine off my MacBook. That was funny, true but funny none the less.