May he bake on a spit for all eternity. 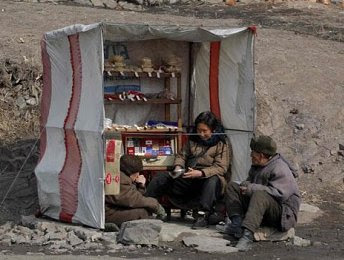 The news came in a radio broadcast at noon local time, Yonhap reported, citing North Korea’s official media. Kim probably had a stroke in August 2008 and may have also contracted pancreatic cancer, according to South Korean news reports.

The son of Kim Il Sung, North Korea’s founder, Kim was a chain-smoking recluse who ruled for 17 years after coming to power in July 1994 and resisted opening up to the outside world in order to protect his regime. The potential succession of his little-known third son, Kim Jong Un, threatens to trigger a dangerous period for the Korean peninsula, where 1.7 million troops from the two Koreas and the U.S. square off every day.

Kim Jong-Il's rule -- with millions dead from starvation, torture and genocide -- represents just another failed experiment in progressivism, Statism, or whatever brand of Marxism you want to call it.

To wit: "Tell the world we are starving."

Okay, got you linked. Kim's son, Kim Jong Eun, can be seen at the video clip at the post: 'North Korea's Kim Jong Il Has Died'.