When you've lost the public sector unions... oh, and please note -- this article was written from the perspective of a drone Obamacare supporter named "Melissa Freeman" (if that is her real name): 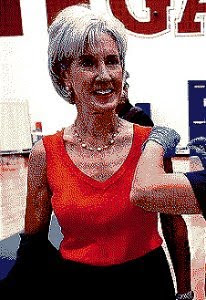 Seven New York state unions have filed federal lawsuits against the state over what they claim is an unconstitutional increase in health care costs for retired workers. This is not a promising beginning for the Affordable Care Act (ACA), now that Kathleen Sebelius, Secretary of the U.S. Department of Health and Human Services (HHS), has given more power to the states in implementing the law.

HHS announced Dec. 16 that individual states will be left to select their own “benchmark” minimum health insurance plan under the national law. As a key step in defining universal health care in the U.S., determining minimum standards of health care should be done on a national level. Sebelius’ choice to delegate this duty to states is a cowardly attempt to evade tough decision-making, leading to a less efficient and effective policy of accommodation rather than full national change, and decreased federal accountability for the outcome of the ACA...

...By delegating this responsibility to the states, Sebelius has also deflected federal, mainly executive, responsibility for the plan’s possible failure, though assuredly not its potential success. The unfolding details of the law will undoubtedly draw many critics: The greater the benefits, the higher the costs; yet the lower the benefits, the less successful the law – a trophy of Obama’s first term. With its validity and effectiveness questioned early on, the ACA is already in a weak position to affect change. Sebelius has further weakened it by giving up the federal government’s ability to establish a major component of how the law will affect the millions of uninsured people across the country...

...With the passage of the ACA as a move towards universal health care, the national government needs to be more involved in establishing the standards that will detail the bill’s vaguely stated requirements. Allowing states to determine their own benchmark plan is a disappointing indicator of the ACA’s potential to bring about actual change...

Hey, genius: we don't have a "national" government. We have a federal government, established by the Constitution. You know, that's the document your pathetic Democrat hack politicians take an oath to uphold and promptly spit upon. And it's the same document that enumerates the federal government's powers.

And, last time I checked, there was no "Obamacare" clause in the Constitution. Or maybe it's hidden next to the "Abortion" clause.

Finally, Ms. Rocket Scientist, please list just one time in the history of mankind that a tiny authoritarian cabal of masterminds were able to centrally-manage an economy.