But maybe he didn't read his solicitation letters -- written on "Congressman Ron Paul" letterhead -- either.

A direct-mail solicitation for Ron Paul's political and investment newsletters two decades ago warned of a "coming race war in our big cities" and of a "federal-homosexual cover-up" to play down the impact of AIDS.

The eight-page letter, which appears to carry Paul's signature at the end, also warns that the U.S. government's redesign of currency to include different colors - a move aimed at thwarting counterfeiters - actually was part of a plot to allow the government to track Americans using the "new money." 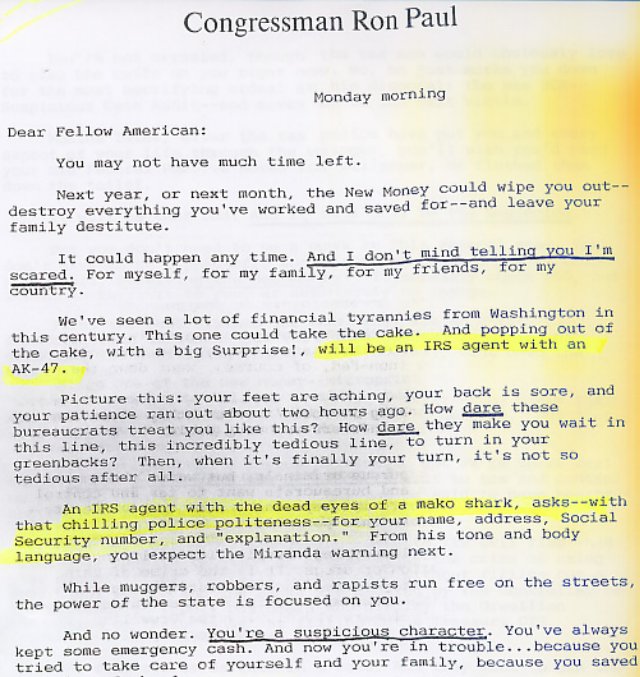 ...The letter's details emerge at a time when Paul, now a contender for the Republican nomination for president, is under fire over reports that his newsletters contained racist, anti-homosexual and anti-Israel rants. 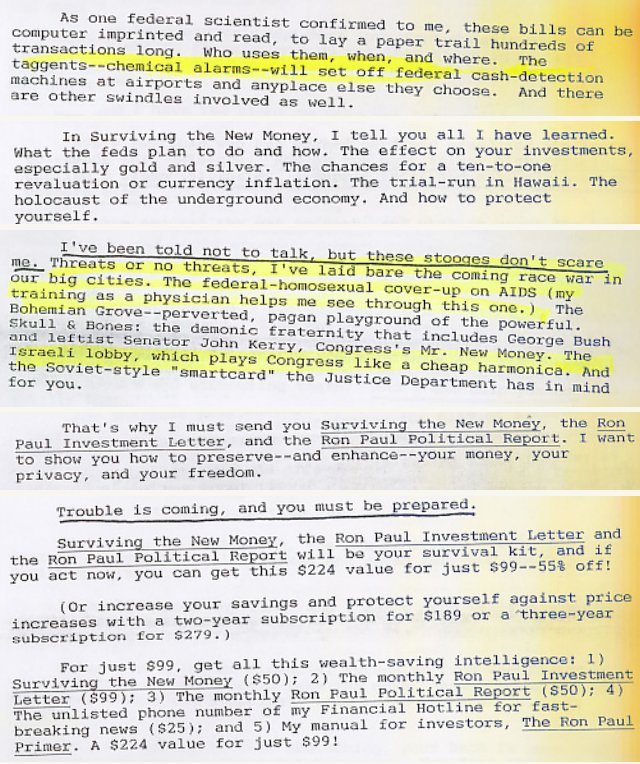 Reports of the newsletters' contents have Paul's campaign scrambling to deny that he wrote the inflammatory articles.

Among other things, the articles called the Rev. Martin Luther King Jr. a "world-class philanderer," criticized the U.S. holiday bearing King's name as "Hate Whitey Day," and said that AIDS sufferers "enjoy the attention and pity that comes with being sick."

at 11:28 PM
Email ThisBlogThis!Share to TwitterShare to FacebookShare to Pinterest
Labels: extremism, Paul

Ok, shit let's not elect anyone.

We've got mormons covering up shady business deals and stealing hard drives from government...we got old elite whitey screwing everything he can find...we got an IRS lawyer, an Alaska Governor who quit, and now lordy!!! We have these newsletters.

Where is Jesus Christ when you need him?

The greatest gift of the Obama administration to America has been the devaluing of the race card to near zero. Now we have Ron Paul showing up at precisely the wrong time to breath life back into it. This is a true face palm moment.

Ron Paul was charging money for his subscriptions and HE DIDN'T KNOW WHAT WAS IN THEM????

What an idiot!!
And the idiots that believe and follow him.

Actually RP may well be a prophet of coming DOOM and many see this as noted by personal firearm and survival gear/food expenditures. The Race War, did you miss the black mob attacks, has started and the New Money has been dispersed by the Ber'snake and MLK, has anyone well disproved the claims? This may not be obvious to the GOP/RNC clones full of stupid racial guilt but plenty of voters know the score.