What does $40 mean to me? I can pay my SEIU union dues (and other tales of woe)

The White House says it's been flooded with responses to the question it posed Wednesday: "What does $40 mean to you?"

One day after the White House asked "working" people to "tell us what your family will give up if your (payroll) taxes increase," the stories are rolling in, including one from a person who worried about not having enough to pay the cable bill -- or continue family pizza nights. 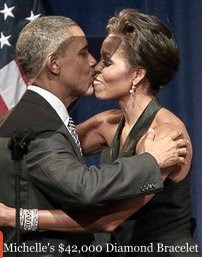 In an effort to help the Obama administration, Cub Reporter Biff Spackle collected tales of woe from typical members of "the middle class", asking them what they could do with that $40.

• "Pay my SEIU union dues (which average $36.75 and are recycled back into the Obama campaign against my will)"

• "Buy 12 gallons of gas, versus 25 gallons when Barack Obama was elected President."

• "Pay for 1.4 days of health insurance coverage, as opposed to 2 days when Obama was elected."

You get the picture. President Subprime McDowngrade is trying to distract citizens with a $2.85-per-day bribe when his catastrophic policies are literally destroying the average American.

As Tyler Durden noted earlier today on Twitter, "Has anybody asked the president yet why to millions of Americans $40 is a matter of survival?"

The payroll tax cut is paid for. Get your info straight, before you mock the working poor.

Another blog run by a greedy liar pandering to idiots who just make sh*t up. The social security fund isn't being raided to pay for the payroll tax cut.

$40 to me and 2499 other Americans means FLOTUS can take another 100K flight somewhere!