Oh, that cwazy, whacky legacy media. And I do mean legacy, since Barbawa Wawa recently celebrated her 160th birthday (but doesn't look a day over 150). 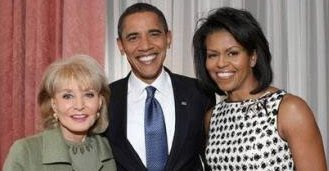 In one of her hard-hitting, cut-to-the-chase interviews, Barbawa sat down with President Obama and asked not about his record-setting deficit spending, the country's loss of its AAA credit rating, the hundreds killed by Operation 'Fast and Furious', the dozens of Congressional leaders to call for the resignation of his attorney general, the record number of Americans living in poverty and receiving food-stamps, or even his 'Arab Spring' diplomacy, which has seen the rise of Islamists around the Middle East.

BARACK OBAMA: You know, it's interesting. There is a deep down, underneath all of the work I do, I think there's a laziness in me. I mean, it's probably from growing up in Hawaii. It's sunny outside, sitting on the beach.

...On Monday's "View," Walters played this clip: "We asked middle school and high school students to throw a few questions. I'd like to read their questions. If you were a super hero and you could have one super power, what would it be?"

The President relayed that he'd like to be able to fly.

Please, no jokes about the president's admitted use of cocaine and reefer.

Oh, and can someone put Barbawa back in formaldehyde to preserve her for the next hard-hitting ABC special?

This is a great opportunity for us all to speculate on what sort of super powers Obama does have- personally, I think he has the amazing power of 'job killing'.

It's amusing to see you snickering about Obama's laziness when you still haven't updated the sidebar ad for your Cafe Press store. Or are you still worried that Republicans might not do well in the 2010 midterms?