POTUS cuts quite a fine figure, to be sure, but I'd be much happier with the dummy as president. It would do significantly less damage.

...According to Las Vegas Mannequins there was so much demand for him that they went ahead and created a fiberglass version of Barack Obama, ready to model khakis, polos, or whatever, with a surprisingly buff and sculpted body. 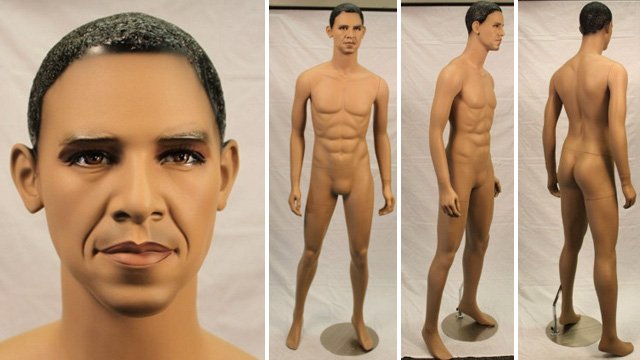 ...If you don't need—or can't afford—the full body mannequin, you also have the option of ordering just his disembodied head.

I wonder what kind of ab workout the POTUS mannequin's doing. He's ripped.

at 11:55 PM
Email ThisBlogThis!Share to TwitterShare to FacebookShare to Pinterest
Labels: Obama, Water-cooler

Nah, the Obama-Dummy already exist; this is just one fellow's attempt at making a smaller-scale REPLICA of the original.

Chris Matthews just got another "tingle" !!!

Kal Penn bought one and sleeps with it to remind him of the hot steamy days in the white house.

I knew he was dickless.