Newt Gingrich just rang up a few extra points on my tally: says Palin would be a viable VP or Secretary of Energy

If swear to all that's holy that I would pay serious money to watch the reactions of the moonbats when President Gingrich and Vice President Palin are sworn in. 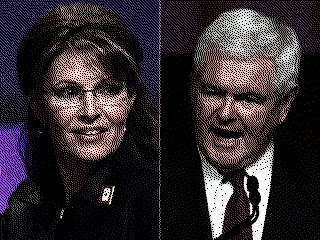 Newt Gingrich said that former Alaska Gov. Sarah Palin would be among the candidates that he would consider when considering a potential running mate, adding that the former GOP vice presidential nominee would be an ideal candidate for secretary of Energy.

Gingrich, speaking Wednesday during a conference call with conservative voters hosted by Ralph Reed's Faith and Freedom Coalition, was asked by one of the attendees whether he would consider Palin as a running mate.

"She is certainly one of the people you would look at. I am a great admirer of hers and she was a remarkable reform governor of Alaska, she’s somebody who I think brings a great deal to the possibility of helping in government and that would be one of the possibilities," Gingrich said...

Reluctantly I've settled on Newt-my ABO is also an ABMitt-this statement seals the deal for me.
MM

I disagree- a conservative-running Newt with tea-party backing should NOT pick a conservative Sarah with tea-party backing. The fact that he suggests this shows he is either lying to us all to drum up support, or that he is honestly going to do this and lose the election to Obama because Palin is not popular with independents and moderates (although I love her and praise her often on my blog).