Say, anyone know how I get a sweet gig as a teacher in Illinois? 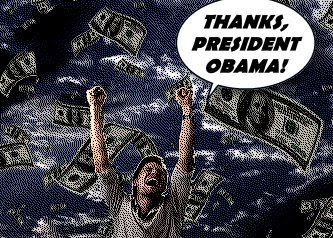 Apparently there is no tax money for the barren shelves at food pantries or the lack of beds at homeless shelters or to support the handicapped.

But there is enough tax money to pay for:

Add about $48,000 each for state pension contribution (30% of salary) and at least $7,500/yr health insurance benefits. Then include 15 days sick leave payable at retirement if not used, 2 personal days [a year] and up to $300,000 payment to the Teachers Retirement System by the local school district if they decide to take early retirement (see "Anatomy of a Teachers Contract" here).

Bill Zettler asks, "Should public employees who average a mere 32 years of 9 month work retire at an average age of 57 with an average payout of $3.7 million?"

After only 20 months of retirement, the average teacher will have received more in pension benefits than the sum total of all of their contributions.

For instance, Karen Koval, a dance teacher, received a taxpayer-funded $188,837 early retirement payout. That will be added to her salary of $165,888, for a taxpayer total of $354,725. Therefore, dance teacher Koval will retire with a pension that will payout about $3.5 million over her expected lifetime.

Sounds real sustainable to me.

That leaves me speechless.

When do we bail them out?

Even here in Northern Virginia, teachers don't make salaries such as these.

Holy shite, even the gym teacher is pulling in 198K.

My mother was a teacher for many years at a high school in downstate Illinois, far from Chicago. Even after long service, she never could have dreamed of a salary like these, and I can assure you that her pensions is...not lavish. Scanning the top 100 spreadsheet, the vast majority (like say, 95-ish percent) are in or around Chicago. There's your problem.

Oh, and I can't even guess at what their retirement is worth.

this is nothing more than the wanton looting of our treasury by these fascist leftist hack aholes.

they vote themselves into power then then they vote them and their friends all of our money, while every day they are in our face telling us how to live and that we are greedy.

we need to flush all these GD DemocRat dictator-wannnabe turds completely down in 2012, it will be our only chance to stop this wholesale Rape of America by these thugs.

As long as Illinois voters keep electing Democrats, none of this will change.

Oh, sure, you'll hear some pols over the next year talk about how teachers pay increases are going to stop. You'll mostly hear this in the months before elections.

But it won't happen. Teachers' unions can reliably deliver lots and lots of votes. Democrat politicians are never going to willingly give up taking your money and giving it to their friends and supporters, because it keeps those politicians employed in the sweetest little looting operation known to man.

The State Politicians have to negotiate these salaries with the powerful Teachers Unions who provide the money to elect the State Politicians. They just get together and hand the bill to the hapless taxpayers. The system, as the socialist unions have envisioned it, is not sustainable.