The aptly named YouTube user RonPaul2012Truth was kind enough to upload and caption the video of his favorite candidate running away from a CNN interviewer ("Ron Paul Walks Out On Interview With CNN Media Whore"). 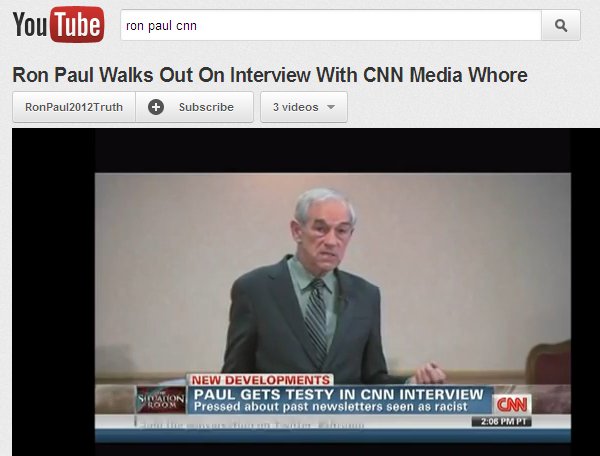 Apparently, Paul will no longer entertain questions about his newsletters -- edited and published by Paul, according to the masthead -- that market a vicious, throwback form of racism, antisemitism and anti-government conspiracy theories. 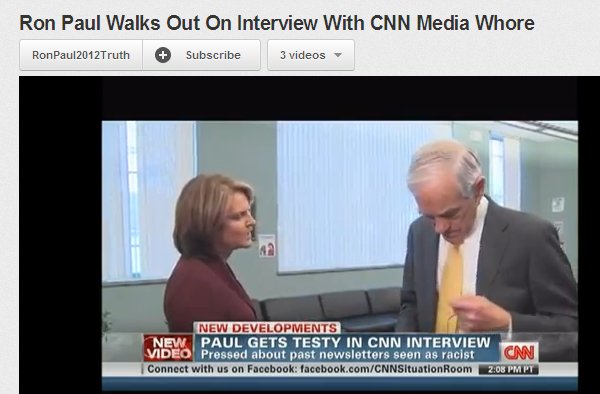 Of course, the entire Paul phenomenon in Iowa is built on smoke and mirrors, as ABC News discovered.

...political observers say that Paul’s support is built in large part with the support of non-Republicans.

In other words, the Republican Primary process in Iowa will be polluted -- once again -- with non-Republican voters.

And rather than close the primary (as many other states do), the hapless GOP lets this inane process occur election cycle after election cycle. Which is why kooks like Ron Paul get to crow about how close they are to winning the Iowa Primary.

Because in the real world of Constitutional Conservatism that is beginning to take over the Republican Party, Ron Paul is a fringe nobody wearing an ill-fitting suit.

at 10:38 AM
Email ThisBlogThis!Share to TwitterShare to FacebookShare to Pinterest
Labels: Democrats, extremism, MSM, Paul

Yep, if you think foreign policy was a mess under Bush, then Obama ... Paul would be the coup de grace for any ideals of American Exceptionalism surviving abroad.

before making judgement, watch the Youtube of the CNN exchange, and see how that BITCH wouldn't accept RP's answer!

government & media must never allow the public
to discover the dirty secrets of the last ten years!

criminal VIPs must be protected at any cost