A Caliphate grows in Sweden

Political Correctness: The perils of multiculturalism and open borders have reached critical mass in Sweden. There are Muslim enclaves where postal, fire and other essential services — even police officers themselves —require police protection. 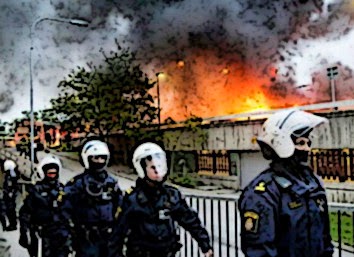 A police report released last month identifies 55 of these "no-go zones" in Sweden. These zones are similar to others that have popped up in Europe in recent years. They formed as large Muslim populations emigrating to politically correct and tolerant European states refuse to assimilate and set up virtual states within a state where the authorities fear to tread.

Soeren Kern of the Hudson Institute has documented the proliferation of these zones. They are de facto Muslim micro-states under Shariah law that reject Western values, society and legal systems. In these districts non-Muslims are expected to conform to the dictates of fundamentalist Islam or face violent consequences.

"A more precise name for these zones," says Middle Eastern expert Daniel Pipes, "would be Dar al-Islam — the House of Islam or the place where Islam rules."

Muslim immigration to Sweden has been fostered by an open-border asylum policy. In the 1990s, the country welcomed 100,000 refugees fleeing the conflict in the Balkans.

Sweden has also been a haven for refugees from Iraq, and a recent estimate put the number of Iraqi refugees living there at 125,000. Since September 2012, asylum-seekers from the Arab world are emigrating to Sweden at the rate of some 1,250 per week, writes Kern.

According to a report in the Daily Caller, Swedish police officers in May pursued a suspect into one of these zones in the southern city of Landskrona. Their car was rammed, the officers forced out. They were quickly surrounded by roughly 50 "thugs" and called for backup while holding back the threatening mob with drawn weapons.

Other officers who responded were forced to stop a half mile away, just outside the zone. The police commander didn't press the issue fearing an escalation. Only with the help of a few residents whom the cornered police knew were the officers allowed to exit the restricted area.

Swedish police have not seriously tried to contest the zones since the 2013 Stockholm ghetto riots in which hundreds of cars and buildings were burned. The police report that there are now vehicle checkpoints operated by Muslim gangs on the borders of these zones. Instead of confrontation, Swedish authorities occasionally send special "dialogue officers" in a sort of Muslim outreach program.

A new curriculum at the Swedish Police Academy beginning next year will include course on cultural sensitivity designed to achieve "greater understanding of the intercultural perspective."

Needless to say, there will be no profiling in Sweden.

Nor will there be any profiling in the U.S., despite a not-too-dissimilar influx of Muslim immigrants to whom assimilation has its limits. In the Minneapolis neighborhood of Cedar-Riverside there is "Little Mogadishu," home to America's largest concentration of Somali immigrants. This neighborhood has become a bountiful recruiting ground for Islamic terrorists.

CBS News has reported that as many as 40 young men from Minnesota have joined Islamic fighters in Iraq and Syria. Among them was an American named Douglas MacArthur McCain, who died fighting for the Islamic State in Syria.

Fox affiliate KMSP-TV in Minneapolis-St. Paul has reported the case of Abdirahmaan Muhumed. Before going to Syria to fight and die for IS, he worked at Delta Global Services, a wholly owned subsidiary of Delta Air Lines. His job was to clean aircraft, and he had a security clearance that gave him unfettered access to the tarmac and passenger jets.

There are no mini-caliphates in the U.S. quite yet. But perhaps we should keep the Swedish experience in mind as we remember the price of liberty is eternal vigilance.

There actually are mini-caliphates in the US. Search around for the jihadi training camps or even Islamberg, NY. Liberals kill Americans with their multi-culti deathwishes.