It is striking that the "compassionate Left" rarely stands up for the rights of women, the LGBT community, people of multiple religious backgrounds, and other oppressed minorities when the oppressors turn out to be those running predominately Muslim countries.

According to The Clarion Project, Qatar "is most likely the largest funder of Islamist terror in the world", yet the United States and its legacy media are curiously silent on the matter. 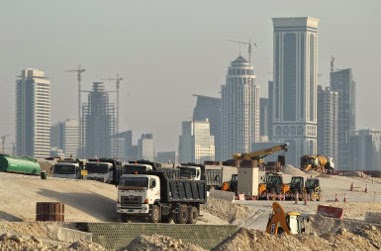 ...[Slave laborers] are involved in construction of the 86,000-seat main stadium for the 2022 World Cup, a top-class hotel complex and two golf courses in Lusail, a new planned city 20 km north of the Qatari capital of Doha.

Most of their fellow workers from Vietnam, India and Nepal get off at dusk, but the North Koreans often labor on in the glare of fluorescent lamps until late at night.

Some 2,800 North Korean workers in Qatar start at 6 a.m. and continue till after midnight, except for a break for food. But they have to give 90 percent of their salary to the regime. A North Korean official admitted to the Guardian that the workers are not paid directly but claimed the money is paid "to their families."

In reality, the Qatari government stands accused of being driven by North Korea's "state-sponsored trafficking for forced labor."

...a North Korean worker typically earns 3,000 rials including overtime pay, but they receive a mere 10 to 15 percent of their salary, with the rest lining the pockets of North Korean leaders.

With no money in hand, the North Koreans stay in their quarters on holidays and need to borrow money from project managers "if they need small things like cigarettes," the Guardian reported.

But they cannot even conceive of escaping because their families are in effect held hostage back in the North.

Nevertheless, many North Koreans want to work overseas because they are at least fed one or two decent meals a day.

Video: The Man Who Killed Osama Bin Laden - PART 1 and 2

Please call the UN and let them know !
-
Yeah right!

Now there are building quickly but whether as end August oil in these sands help keep it alive?