I rarely if ever watch 60 Minutes, as they have been kissing Obama’s ass since before he was elected in 2008. They are part of the left wing media and are now a joke when it comes to investigative journalism. Last night it came on after the football game I was watching and the opening story was about the infrastructure crisis in this country. I thought I’d give it a chance. After five minutes of propaganda, mistruths, false story lines and interviewing an ultimate insider hack lobbyist for corporate America, I turned on a more realistic truth telling show – The Simpsons. 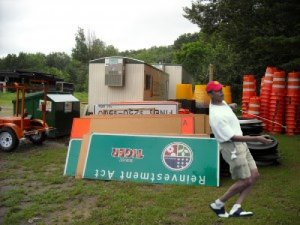 Every time a politician or media pundit opens their mouth about infrastructure you know they are lying. Democrats and Republicans are equally guilty of misleading the public about this issue. They know the sheep aren’t paying attention and will believe their bullshit. The mantra is always the same. We’ve neglected our roads and bridges and now they are dangerous. The Federal government must do something about this crisis. They need more money. Somehow we managed to not spend any money on our highways for the last 30 years. The politicians and the media insist we need a trillion dollar infrastructure plan to save our highways and bridges. Amazingly, these politicians and media outlets are supported by contributions and advertising revenue from the corporations who would benefit from a massive infrastructure bill.

The reason our roads suck isn’t because there isn’t ENOUGH money. It’s because politicians chose other things to spend OUR money on. Here is the deal. The states spend in excess of $200 billion per year on their highways. The Feds spend another $50 billion of your money on roads. Most of these funds are extracted from your pocket through gasoline taxes and tolls at the State and Federal level. How come $250 billion per year isn’t enough? The Keynesian morons like Krugman and Larry Summers are sure a multi-trillion dollar infrastructure plan paid for with your money will stimulate the economy and save America. If I recall, the $800 billion Obama porkulus infrastructure program was about shovel ready jobs. How did that work out? The fact is the federal government is only responsible for 140 thousand miles of road or 3.4%, largely roads in national parks, military bases and Indian reservations.

There are 4 million miles of roads in the U.S., with only 2.6 million miles that are paved. We are paying almost $100 per mile per year. The Federal Highway Administration tracks the state of repair on 892,163 miles of major highways that are eligible for federal aid. In 2012, the latest data available, the FHWA found that 182,872 miles, or 20.5%, were in poor or mediocre condition and needed repaving or even more substantive repairs. The nation’s Interstate Highways are in relatively good condition, with only 1.8% of rural miles and 5.0 percent of urban miles in poor or mediocre repair. Other highways, however, are in much worse shape, particularly in urban areas where more than one third of all arterial and collector miles are in poor or mediocre condition.

The Federal Highway Administration‘s 2013 National Bridge Inventory shows that 146,598, or 24.2%, of the nation’s 605,471 bridges are either structurally deficient or functionally obsolete. This includes 63,207 structurally deficient bridges (10.4%), which are safe to use but need significant maintenance or repair to remain in service, and 83,391 functionally obsolete bridges (13.8%) which may be in good repair but fail to meet current design standards, such as lane width, shoulder width or overhead clearance and thus need to be upgraded when they are replaced. In recent years, state and local highway agencies have been investing heavily in bridge maintenance and repairs. As a result, bridge conditions have been improving. Between 1998 and 2012, the number of deficient bridges fell from 29.5% to 24.2%. The improvement was concentrated in structurally deficient bridges, which declined from 16.0% of all bridges to 10.4%.

The roads I travel every day have been under some form of construction for the last six years. There is no lack of activity on roads and bridges in the U.S. If $250 billion per year isn’t enough than politicians shouldn’t have pissed their budget funds away on worthless education initiatives, free school lunches, outrageous government worker pension plans, free shit for the masses, tax breaks for mega-corps, and a myriad of other wasteful corrupt spending. Every State and local government in the country is required to have a balanced budget. As a homeowner, I know that as my house ages things will break and need to be replaced or repaired. Everyone knows this will happen. It isn’t a shock. I’ve lived in my house for 19 years. I’ve had to replace my garage doors, windows, front door, back door, hot water heater, faucets, lighting, sump pump, washer, dryer, stove, dishwasher, TVs and many other household items. I have always anticipated these things in my budget and made sure I could pay for them.

Politicians who run our State and local governments know the expected life of highways, water pipes, sewer pipes, utilities, public buildings, and all the other infrastructure they are required to maintain on behalf of the citizens. They do a budget every year that must balance and be approved. It is they who have purposely chosen to not set aside enough money to maintain the infrastructure. They have chosen to spread the money to their benefactors in the corporate world or the union sector. This is not a crisis for the country. This is a failure of government at every level. Instead of focusing on the terrible management of taxpayer funds, 60 Minutes interviews Roy LaHood (former Secretary of Transportation) who declares that Congress needs to dramatically increase spending and taxes for infrastructure. Everyone wants MOAR.

LaHood sells himself as a noble patriot co-chairman of Building America’s Future, a bipartisan coalition of current and former elected officials that is urgently pushing for more spending on infrastructure. The faux journalists at 60 Minutes fail to reveal that LaHood has two other jobs that deal with infrastructure. LaHood is Senior Advisor to Meridiam Infrastructure, a private equity underwriter (PEU) specializing in infrastructure and Senior Advisor to law firm DLA Piper, a lobbying firm for infrastructure companies. The guy is a whore for corporations that would benefit from your taxpayers being pissed away on bloated construction projects.

Here is the reality of our infrastructure crisis:

60 Minutes is nothing but another propaganda outlet for the vested interests. They don’t want the system to change. They just want more of your money. The entire Infrastructure Crisis Storyline is a scam.

“It is a popular delusion that the government wastes vast amounts of money through inefficiency and sloth. Enormous effort and elaborate planning are required to waste this much money.” ― P.J. O’Rourke, Parliament of Whores: A Lone Humorist Attempts to Explain the Entire U.S. Government

True. Always will be.

Ok, but how about the other part of infrastructure, the sewer and water systems?

As a farmer and owner of another small business, I have been fined for accidental discharge of manure ( an extremely small one) that took us about a year to pay off (and thankfully did not put me out of business). And have constant surprised inspections from DEP to make sure we're not in violation of numerous regulations regarding water and land contamination.


Practically every day a new sinkhole opens up in Harrisburg, untreated sewage is discharged into the river, and no fines are imposed on the municipalities, because decades of sewer payments have gone to pensions and not to replace or fix sewer lines. And they are broke because they keep raising the sewer rates and no one can keep up with them, especially the businesses.

I believe that there are people in Harrisburg that have been displaced from their homes for months due to sinkholes-- that aren't being addressed.
In other words, we can't trust "THEM" to do anything that they are supposed to be doing. So we certainly can't trust them in regards to the true status of anything.