Defense: Members of Congress warn that the State Department is working on arms accords to demilitarize space and ban anti-satellite weapons, leaving Russia and China with a huge lead in military space capabilities. 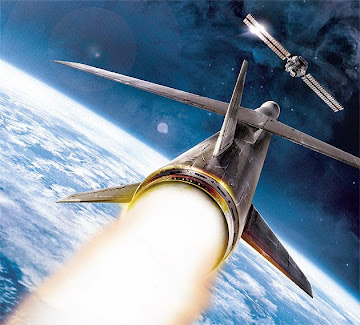 On Jan. 17, 2012, then-Secretary of State Hillary Clinton issued a statement announcing the Obama administration's intention to work with the European Union on an International Code of Conduct for Outer Space Activities. It was supposed to be sort of a "rules of the road" for space-faring nations to deal with issues such as the accumulating space junk jeopardizing satellites and manned space activities such as the International Space Station.

It soon became apparent that the vague, loosely worded and allegedly nonbinding accord that would be negotiated would become a pretext to restrict the so-called militarization of space. In 2007, a successful Chinese test of an anti-satellite weapon against an aging weather satellite spewed tens of thousands of pieces of debris into low-Earth orbit, posing a hazard. Space treaty advocates felt that space was getting crowded enough without militarizing it.

However, a 2012 EU analysis of the draft code provided to the House Armed Services Committee at the time warned that if the U.S. "were to make a good-faith effort at implementing the requirements of the draft code," it would have an impact on U.S. military operations.

The 2007 Chinese test was an early probe by that country to see if it could take out U.S. surveillance, communications and GPS satellites. China is deploying its own GPS, and in a conflict with the U.S. it could knock out ours and retain its own GPS capability.

This space accord looms as an extraterrestrial version of the Law of the Sea Treaty, a convention that turns control of the world's oceans over to a global administrative body that would replace the U.S. Navy as the guarantor of freedom of navigation. It would tell us what we could do and when on the high seas.

In February 2008, Aegis-equipped missile cruiser Lake Erie succeeded in shooting down a non-functioning satellite that weighed 2.5 tons. It hit the satellite before the satellite struck the Earth and spilled the contents of its nearly full deadly hydrazine fuel. Such capabilities would be considered the militarization of space.

Last Wednesday, Rep. Doug Lamborn, R-Colo., and Sen. David Vitter, R-La., wrote a letter to Frank A. Rose, deputy assistant secretary of state for space and defense policy, expressing concern that continued pursuit of such an accord would jeopardize national security.

"We are deeply concerned by the rising threats of anti-satellite weapons in the hands of states like the People's Republic of China," the pair wrote.

And well they should be, for it's a capability Beijing is seriously pursuing. China has two ground-based anti-satellite weapon systems, advanced ground-based anti-satellite laser systems, "and is developing dual-use co-orbital satellites that can monitor or attack U.S. satellites," according to Rick Fisher, a China military affairs expert and analyst at the International Assessment and Strategy Center.

On July 23, China carried out a test of its Dong Neng-1 satellite interceptor. Adm. Cecil Haney, commander of the U.S. Strategic Command, said the test was a further indication of Chinese efforts to "militarize space." This follows a May 2013 test of the Dong-Neng-2.

When President Obama told the Russians that after the 2012 election he would have more flexibility to gut U.S. missile-defense capabilities, was he speaking of space defense as well?

Like the New Start Treaty, we may be subjected to another arms-control agreement that only leaves the U.S. more exposed to its enemies.

Real simple. Get rid of Obama. Lock down any and all technology this country develops and keep China and Russia from stealing it. Those two countries couldn't develop a transistor on their own.

Our laser technology is so far ahead of the rest of the world. Get back to the Star Wars projects. That would give NASA something to do, other than eat popcorn and watch other countries and businesses launch into space, technology stolen from us.

China? How about Russia?

Must be that "More flexibility after elections" Mr. Obama was talking about before his reelection...