REVCOM.US: The Message is in the Signs

The message is in the signs, which are basically advertising.

Study the photos of demonstrations in Ferguson, and about Ferguson across the U.S. and it becomes clear who is driving the new civil rights movement. 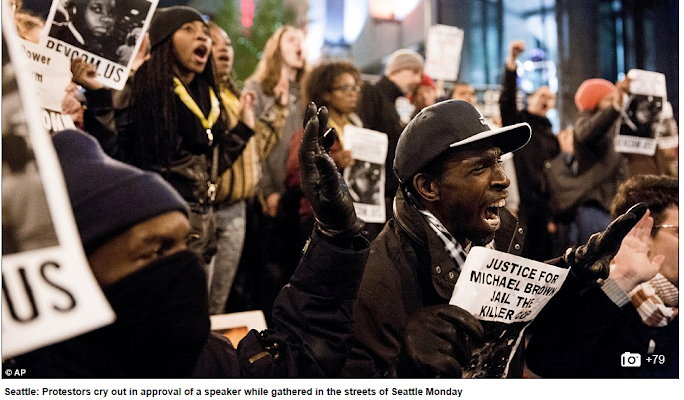 REVCOM.US is just one of a multitude of alleged players. But then, the question really is: Who’s paying for the signage, and how are the signs being distributed.

The MSM is not asking that question.

Of course not, Lee. The media actively foments violence. It's "newsworthy", after all.

How did this go down?

Same psychopaths trying to destroy our country as are running it that's who.
There's no unrelated crisis as a means in Obama land.
Its gotterobamarung baby!

Last night as a white man I was appalled at the verdict. I went out with some matches and lite my house on fire as I hurled racial epitaphs about injustices. I waited for people to show up to light the neighborhood on fire but the only folks to show up was the fire department.
Shit, can I sleep at your house?

I know how it is first hand. We hired a young black man for our company. He just wouldn't show up on time or work when he was there. I had no choice but to let him go. I told him that it just wasn't working out and I had to let him go. The first thing he said to me was that I was prejudice and the only reason I was firing him was because he was black. So I told him the truth that he was mistaken-- We hired you because your black but we're firing you because your not worth a shit. I expect a call from the white house any day now.