Energy Policy: Hours before the president who stalled the Keystone XL pipeline arrived in Beijing, Russia and China signed 16 energy agreements, including one to supply Russian natural gas to its energy-hungry neighbor. 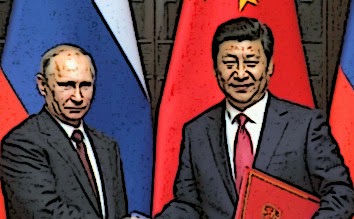 Chinese President Xi Jinping's meeting Sunday night with Russian President Vladimir Putin was the 10th between the two since Xi took China's helm 20 months ago. They talked energy, the critical role of which in world affairs they, if not the Obama administration, seem to recognize.

The 16 agreements that they inked included one dealing with a western pipeline, the Altai route, to carry 30 billion cubic meters (bcm) of Russian natural gas to China annually, part of a framework agreement between Russian energy giant Gazprom and the state-run China National Petroleum.

The new energy supply line complements an already announced pipeline in the east, dubbed the Power of Siberia, which will supply 38 bcm annually to China. Work on that route began after a $400 billion deal was signed in May.

Yang Cheng of the Center for Russian Studies in Shanghai said of the agreements that they represent "the shared pursuit of major emerging economies seeking a greater capability to shape the international and regional order."

Both Russia and China are expansionist powers, with Putin seeking to reassemble the lost Soviet empire and China pursuing territorial ambitions in the East and South China Seas.

Shaping the international and regional order is the furthest thing from President Obama's mind as America withdraws from the world stage, while China and Russia rush to fill the power vacuum that we have created.

To Obama and Secretary of State John Kerry, fossil fuel, including natural gas, contributes to climate change and is a threat greater than Russia, China or Islamist terrorism.

Elections have consequences, as the president has noted, and the 2014 midterms mean that approval of the Keystone XL pipeline from Canada to our Gulf Coast refineries may be the very first piece of legislation that the new Republican Congress places on Obama's desk.

Asked about it at his post-election news conference last Wednesday, Obama once again said there was a "process that's moving forward, (and) I'm going to let the process play out."

The question, he said, is whether the pipeline is "something that doesn't increase climate change that we're going to have to deal with," and he was going to "gather up the facts."

He's had six years to gather up the facts as the process played out. The facts are in, and they are that the State Department, tasked with examining and approving the international pipeline, has repeatedly approved it, with the latest report last January again affirming in its fifth and final environmental impact statement that the pipeline itself would have no net detrimental impact.

Obama added, "While this debate about Canadian oil has been raging . . . we've seen some of the biggest increases in American oil production and American natural gas production in our history."

True enough, but it's an increase he had nothing to do with. The increase is due to the use of a free-market technology called fracking, which his environmental base opposes, to develop oil and gas on private and state lands, as federal lands remain off limits.

Keystone is not just about Canadian oil. As we've noted, the pipeline would not only carry oil from Canada to U.S. refineries, but also have a link to the Bakken formation oilfields of North Dakota.

Most of the oil must now be shipped by dangerous rail tank cars. Many rail shipments from the Bakken fields are being handled by BNSF Railway, owned by Obama's favorite one-percenter, Warren Buffett.

Get that bill ready, Congress. It's time that we pursue our energy and national security interests as diligently as the Russians and Chinese.

They all work towards one goal: communism worldwide.

Russian and China are trying to build up their nations within, not destroy them like the traitor we have in the White House.

And he is a traitor.