WHY, OF COURSE HE IS: Eric Holder Shields Accused Cop-Killers From Facing Death Penalty

Justice: Eric Holder, who dropped the New Black Panther case and almost had a defender of cop-killer Mumia abu-Jamal as an assistant, takes the death penalty off the table for four alleged Virginia cop-killers. 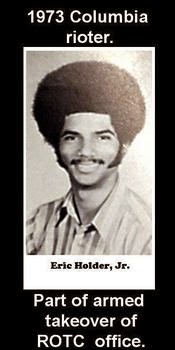 The National Guard has not been called up, Al Sharpton has not made an appearance, and neither have 40 FBI agents been dispatched to ensure the convictions of the four gang members who allegedly murdered a Virginia police officer.

Nor will there be riots and looting if they are acquitted.

When cops are the victims instead of the accused, a different standard of social justice seems to apply.

In February, officer Quick never made it after he texted his girlfriend that he was on his way to see her.

According to police, Quick was set upon by three siblings and a fourth man, and was carjacked, kidnapped and taken from bank to bank to withdraw money using his own debit card at gunpoint before being shot to death.

His body was found in a wooded area in Goochland County six days later.

Siblings Daniel Mathis, Shantai Shelton and Mersadies Shelton have been charged along with a fourth man, Kweli Uhuru, in a federal indictment that lists them as members of a street gang called the "99 Goon Syndicate," an offshoot of the infamous "Bloods" gang, and allegedly committed the murder to climb in the gang ranks.

The alleged killers now await trial, which is currently set for May 4, 2015.

Federal prosecutors say that U.S. Attorney General Eric Holder has taken the death penalty off the table in this case and that the four co-defendants will instead face the possibility of life without parole.

No official reason has been given in this case of premeditated murder. But we suspect the reasons include Holder's opposition to the death penalty and his sharing of the belief that the death penalty in particular and the justice system in general are skewed against minority defendants such as these four accused.

Fox News reports that of the 1,236 death penalty cases brought before Holder's DOJ through 2013, only 27 have been approved for the death penalty.

After the botched execution of convicted killer Clayton Lockett in April, who reportedly writhed in pain before dying of a heart attack after his lethal injection, President Obama tasked Holder with a national review of the death penalty.

"Racial bias. Uneven application of the death penalty. Situations in which there were individuals on death row who later on were discovered to be innocent ... All of these do raise significant questions about how the death penalty is being applied," Obama said in calling for the review. "I think as a society, we have to ask ourselves some difficult and profound questions."

Holder, who once called the United States a "nation of cowards" regarding discussions of race, is the AG who failed to prosecute one of the clearest cases of voter intimidation in American history in Philadelphia by black militants, members of the New Black Panther Party.

If they had been white supremacists in, say, Alabama, we suspect that he would not have been so reluctant.

Holder expressed no opposition to Debo Adegbile, Obama's nominee to be assistant attorney general for the civil rights division at the Department of Justice.

Adegbile fought to free from prison and save from the death penalty one Mumia abu-Jamal, the cold-blooded killer of Philadelphia cop Daniel Faulkner.

Their deaths cannot be taken off the table, and Holder's Justice Department appears to be anything but colorblind.

Hmmm, last I knew, Capital Murder was a death penalty crime in Virginia. What is (with)holder doing meddling in a STATE case, unless he plans on charging the 'alleged' offenders with a hate crime................

Say, does anyone else remember what Lemaricus Davidson and his gang did to Channon Christian and Christopher Newsom? Or how thoroughly the press suppressed the news of the incident?