FREEDOM OF THE PRESS IN A WAR ZONE? One Embedded Reporter vs. the Establishment

MADISON, Wis. — Wayne Anderson, seeing the carnage unfold before him, did what any veteran embedded reporter in a war zone would do: He reported on it. 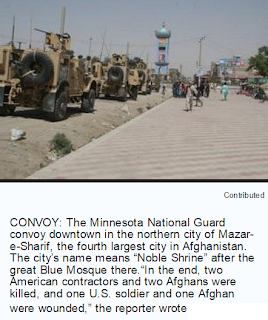 “The first response vehicles arrived and I thought, ‘Oh, shit, something is up here,’” Anderson told Wisconsin Reporter in an interview last week. “They started offloading the dead and wounded, and I had the presence of mind to get my video camera out of my pocket and start taping this news event.”

He quickly went about talking to witnesses and military officials on the ground at the U.S. Army’s Camp Mike Spann, the U.S. Army base not far from Mazar-e-Sharif in northern Afghanistan. The camp is named for the first American casualty of America’s longest war.

It was all standard operating stuff for the 59-year-old freelance journalist from Frederic, who was on in his second tour of embedded reporter duty in a war zone.

Anderson’s journalistic instincts cost him his job and his professional reputation, setting off a four-year First Amendment fight with the U.S. Department of Defense that is far from over.

His case is now before the U.S. Court of Appeals District of Columbia Circuit. Anderson claims Army officers tried to intimidate him to not run his account of deadly shootings on July 20, 2010. And when he did, Anderson said the Army retaliated against him and removed him from his “embed” appointment.

The issue “has profound consequences for reporters risking their lives in Afghanistan and Iraq,” Anderson wrote in a 2011 op-ed for the Washington Times, where his story first appeared.

“Whenever an international body (NATO) declares the power to disregard basic democratic safeguards for reporters, it has a chilling effect on objective news reporting. Fear is a powerful tool.”

Anderson’s professional resume is a story of two lives.

After graduating from journalism school at Texas Christian University in Fort Worth, Texas, in 1984 a stint with the Fort Worth Star-Telegram and freelancing for the Dallas Morning News, he started a successful construction business in California.

He did well enough to retire early and moved to Wisconsin, to freelance in a business he missed. When a chance arose, he embedded with a Wisconsin Army National Guard unit in Iraq, during the first surge.

In 2010 his wife gave her permission for him to join a Minnesota Army National Guard unit bound for Afghanistan. A Lutheran pastor called it a “divine appointment,” he said.

In March 2010, Anderson signed the International Security Assistance Force Media Accommodation and Ground Rules Agreement and faxed the documents to the proper authorities. Beyond the Washington Times, the reporter was set to represent newspapers in Wisconsin and Minnesota, as well as a Minnesota radio station.

According to the story he filed with the Washington Times, a training exercise on July 20 “erupted into a deadly gunfight between Afghan and U.S. instructors …”

A series of events and misunderstandings led to a kind of tragic multi-party shootout at the Regional Mass Training Center at Camp Shaheen, adjacent to Camp Spann.

But the Afghan officer’s account differed markedly from a witness at the scene. Brig. Gen. Sanaull Hag, acting commander of the 209th Shahin Corps of the Afghan National Army, essentially confirmed the eyewitness account, Anderson reported.

The accounts indicated, and the Army later acknowledged in documents obtained through a Freedom of Information Act Request, that the shooting was probably premeditated, if not a suicide attack.

‘I wish this story had not happened’

It was clear early on the U.S. Army was unhappy Anderson reported on the grimmer aspects of the shooting. His report might damage the Obama administration’s narrative that U.S. forces were on pace to turn security operations over to the Afghanistan army.

It was a rough time for defenders of U.S. policy in Afghanistan, as Anderson noted in his Washington Times op-ed piece.

In his lawsuit, Anderson said the U.S. command tried five times to stop his coverage of the story.

“One night, the Army sent a fairly high ranking two-man team, I think a major and a captain to see me,” Anderson recalled. “It was about 9 p.m. that night, they came and strongly suggested that I did not do the story so that I could get back on charter to do these stories I came to do (feature pieces on the National Guard soldiers).”

A day after the story ran, Army officers “verbally accosted” Anderson at a meeting where they told him his embedded status had been terminated.

On July 31, he was sent packing to Kabul, where Anderson received a 15-minute hearing alongside a “busy military airport terminal.” At the time, Anderson was charged with posting a video of wounded personnel. There is no Army policy against that. It would later come out that he was essentially charged with posting the identity of wounded personnel, something that is forbidden under U.S. military code. Anderson disputes the claim, asserting that no individuals are identifiable in his fast-moving video.

“Without seeing the video, Col. (Hans E) Bush determined my guilt, signed the embed termination memorandum and I returned home to the United States,” he said.

Wisconsin Reporter attempted to contact several military officials involved in the discipline of Anderson and subsequent legal proceedings. None could be reached for comment. An official with the U.S. Department of Defense said she would not comment on pending litigation.

“With all due respect, I wish this story had not happened,” Anderson continued. “First, it’s so tragic, and it takes away what I came to do. But I’m a reporter. What was I supposed to do?”

Anderson immediately began a one-man legal battle against the Pentagon. His lawsuits eventually would include such powerful defendants as Secretary of the Army John M. McHugh, respected secretaries of Defense Robert Gates and Chuck Hagel, and the aforementioned Col. Hans E. Bush.

Serving as his own attorney, Anderson spent the latter half of 2010 researching and putting together his appeal before the U.S. Army. He questioned command in Afghanistan via interrogatories.

Coming to Anderson’s defense were the Reporters Committee for Freedom of the Press and Anderson’s contracted employer, the Washington Times.

“Based on my discussions with Wayne, I believe the military acted improperly in rushing to judgment and wrongly terminating his embed,” wrote Bill Gertz, then-geopolitics editor for the Washington Times, in a letter to Col. Greg Julian, chief public affairs officer for NATO Supreme Headquarters Allied Powers Europe, who was handling Anderson’s appeal.

In January 2011, Julian released his verdict, finding that the U.S. Constitution was “not relevant” in Afghanistan and that “there is no (U.S.) law governing the accommodation of the media.”

NATO officials consistently have declined to release how many embedded reporters in Afghanistan and Iraq have been booted.

Video - All of #GruberGate in Two Minutes

Seems as the tentacles of the White House are long and slimy. Are our military officers being career threatened by those above?