Pass the Kleen-Ex, Tito: Ryan Whitwam has the bad news for the Apple fan-bois (and gurlz). 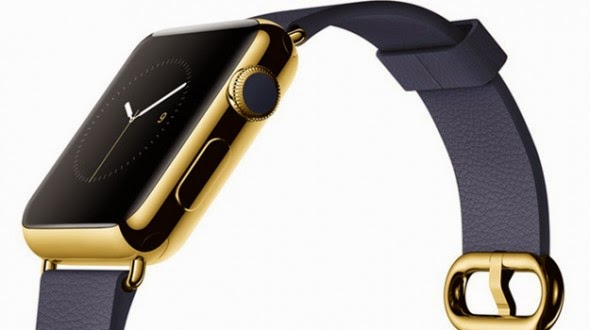 Apple pre-announced the much anticipated Apple Watch a few months ago, but neglected to discuss a price or exact launch date. Rumors are now pointing to a Valentine’s Day (February 14th) release in the US and a higher price than expected. The mid-tier stainless steel watch will sell for a somewhat high $500, but Apple will reportedly also offer the 18-karat gold “Apple Watch Edition” version for a whopping $5,000.

Any watch priced at $5,000 is a serious luxury item, and this device doesn’t even have all the intricate clockwork that watch enthusiasts love to geek out over. The rumored price is much higher than previous estimates based on similarly sized gold accessories. Jewelers estimated the gold watch could cost about $1,200. This version of the watch will also come with sapphire crystal and exclusive strap options. Still, that’s a lot to spend on a device that will be replaced with a new version in a year.

Thanks, but I think I'll stick with my mechanical timepiece, which hasn't required a battery in -- oh -- about 25 years of continuous use.

Take the cash and spend a couple of thousand bucks on a great dinner with all your friends. Then donate the rest to the Tea Party where it will do some good.

I, yeah. I skipped Samsung's wrist device too, and could have gotten it for a steal. I don't want to be that connected. Besides, phone tag is the only sport I currently excel at! :)

Hey, though... What watch do you wear! If you are serious about the 25 year thing. I have spent good and little money, $40 to $1k, trying to find a watch. I tend to kill them. Many brands and types, but certainly not all. And, do you think your watch brand is still available, well made? Seriously, price isn't (too much) of an issue. Regular function, that's all I want. Well, and no pot-metal skinrot from most watches today. Bleh.

Believe or not, I had one... a bit before you. Though a gift from a lady friend of the time. Health and all went downhill, had to sell it as a last resort. It's a bit out of my current capacity to replace. Well, I hope it lasts the rest of a long life for you. I'll... keep looking.

Just a heads up: the tudor brand is also made by them and is equally durable. friend of mine had one for a long time and loved it.

We'll the type of person that would buy this would normally go out and buy a $10-25k Rolex, so what does it really matter?