Smartest President Ever Prefers Shipping Oil by Train Rather Than Dangerous, Experimental Devices Known as "Pipes" 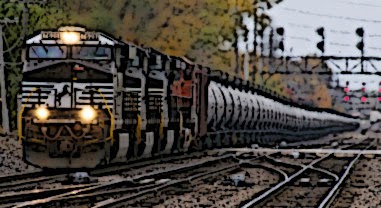 In his post-election press conference, the president noted in justifying his continual kicking of the Keystone XL oil drum down the road that "while this debate about Canadian oil has been raging ... we've seen some of the biggest increases in American oil production and natural gas production in our history."

That increase is due in large part to oil recovered from the Bakken shale formation centered on North Dakota. So much oil has been found there that the Energy Information Administration notes a 13.4% jump in rail shipments of oil over last year, a trend likely to continue.

This is both good news and bad news, for increased rail shipments of oil raise the risk of catastrophic train derailments. A State Department analysis released in June found that rejecting the Keystone XL pipeline project would result in 2,947 injuries and 434 deaths as oil companies shipped their oil by means, including rail, that are demonstrably less safe.

As we've noted, Keystone would not only carry oil from Canada to U.S. refineries, but also link to the Bakken formation. Many rail shipments from the Bakken fields are being handled by BNSF Railway.

The danger of rail shipments from Bakken is heightened by the fact that Bakken crude is more flammable than other crude, according to the Pipeline and Hazardous Materials Safety Administration.

"The no-action alternative of rail is a misguided plan," former PHMSA head Brigham McCown said in the Washington Free Beacon. "Pipelines have proved themselves to be safer, more environmentally friendly and more cost effective than the alternative."

Environmentalists claim the Keystone pipeline from Canada represents an unprecedented environmental threat. But Keystone poses no greater danger than the more than 50,000 existing miles of safely operating pipeline already crisscrossing the U.S.

The right-leaning Manhattan Institute says trains spill 33 times more oil than pipelines, and the left-leaning Brookings Institution says the evidence that railroads are far less safe than pipelines is "overwhelming."

Keystone not only means jobs, lower energy prices and economic growth, it also means more safety and security for the American people.

Now which Omaha Oracle just so happens to own one of the major rail lines that transports this oil? Nope, no crony capitalism there, kids.

And isn't that same Omaha Oracle one of Obama's major donors?

Gee, could it be those awful Koch brothers?

There have also been trains that cross and re-cross the border between Canada and the U.S. to collect the subsidy for using rail to transport oil.The oil isn't unloaded,it just goes back and forth.It's even been reported on by major media(that's a surprise)and still occurs.Funny how being a friend of urkel saves his rich benefactors from governmental scrutiny.