After nearly three years with my old Android smartphone -- a reliable workhorse with admirable battery life, the Motorola Razr Maxx -- it was time for a refresh. After reading a bunch of reviews, I chose the Samsung Galaxy Note 4. Often described as a "phablet", the extra-large phone is roughly the size of an iPhone 6 Plus, but holds the advantage of not being an Apple product. It also includes a built-in stylus for taking notes and dropping some art on my peeps.

The first two sketches -- each drawn in less than 60 seconds -- are depicted below. 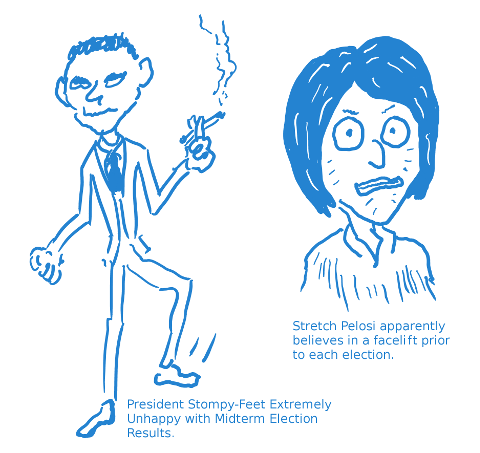 As an aside, for the life of me I can't figure out how Microsoft OneNote is supposed to work. I was easily able to create a notebook and add some pages and sketch out a few drawings. How to export said pages has proven to be extremely frustrating. There isn't an export option. I used the sync feature to try to push the files up to the proverbial cloud; but multiple efforts to access the pages in the notebook using my laptop resulted in a blank page (Chrome) or a never-ending "progress" indicator (IE10).

How'd I get these images uploaded? Kludge central: I took a screen-cap of each on the Galaxy and simply emailed 'em to myself. Final edits occurred using GIMP, the most excellent open-source analog of Photoshop.

In any event, if I can't figure out how to use OneNote, my guess is there are many other users similarly challenged.

BREAKING OT: On The Daily Show on Tuesday, Jon Stewart dumped on Nancy Pelosi twice. In the Gruber segment, he showed how Nancy Pelosi lied about knowing Gruber. Stewart said that Pelosi "never fails to disappoint us."

Then, on the Tammy Duckworth segment, Pelosi was shown to be a vindictive hack. Stewart declared that Pelosi must go.

We've known Pelosi was awful for a long time, but when Jon Stewart turns, it's over.

Hey, you! Quit doodling and get back to writing. I'm still waiting for the sequel to "Hard Boiled".

@creeper - thanks for the plug!

I'm about 1/10th through the sequel but need a good block of time to plow through it.

maybe in the summer!