It is common knowledge that most of Hollywood is populated with progressive, liberal Democrats, but, apparently, Variety magazine online is partial to the Revolutionary Communist Party USA.

Revcom.us signs were carried at several of the Ferguson demonstrations across the nation.

Perhaps some of those carrying the signs assume Revcom.us is a cosmetic company, or just didn’t bother to wonder what Revcom.us is. 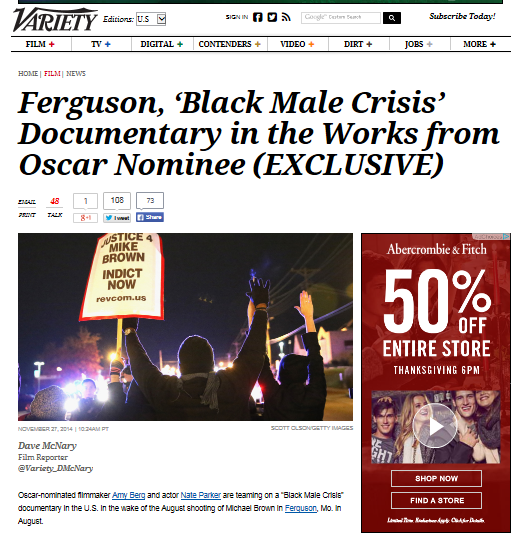 The Revolutionary Communist Party, USA has taken on the responsibility to lead revolution in the U.S., the belly of the imperialist beast, as its principal share of the world revolution and the ultimate aim of communism.  This Party is built on and takes as its foundation the new synthesis of communism that has been brought forward through the body of work and method and approach of Bob Avakian.  Its members are united in their profound desire for a radically different and better world, and their understanding of the need for revolution to get to that world. They have dedicated themselves wholeheartedly to revolution, and on the basis of that they channel their individual abilities and passions to the cause and needs of this revolution.”

All that mumbo jumbo has the ring of “fundamental transformation” – which is another linguistic siren song that attracts useful idiots just as Communist doctrine during the 1950’s attracted Americans with the same intellectual DNA as Revcom.us sign-carriers, along with their close cousins, the fellow travelers.

In the Cold War, these folks were supporters of Communism, but not official "card-carrying members" of a Communist party.

The useful idiots abound among us.

The Oscar win is already in.