Sorry, Nissan, but you're no Kim Kardashian

Paper set out to “break the Internet” yesterday with its now-infamous cover photo prominently featuring Kim Kardashian’s ass. This, of course, got everyone talking on the (as yet unbroken) Internet, driving Nissan to awkwardly tweet its way in on the joke. 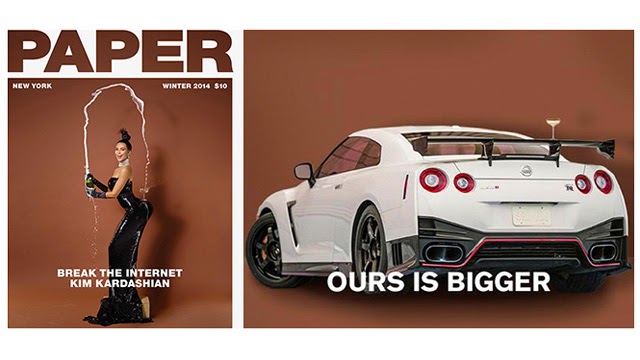 Nissan’s gag plays on the less revealing version of Paper’s two-part cover photo (see them here, and be warned—there’s naked booty ahead). But that’s the problem: the non-naked photo Paper chose for its cover is itself a riff on an older photo, Jean-Paul Goude’s equally NSFW “Champagne Incident”. That makes Nissan’s tweet a joke about a joke—all in the name of riding a dopey hashtag wave.

The GT-R is one of the world's few, true sports cars; as such, its image doesn't deserve to be tarnished with the likes of the least interesting celebrity in the world.

at 9:54 PM
Email ThisBlogThis!Share to TwitterShare to FacebookShare to Pinterest
Labels: Autos, Hollywood

Her ass is as artificial as the car's:

Video: The Man Who Killed Osama Bin Laden - PART 1 and 2

Kim Kardashian is no longer allowed to go to the beach due to environmental regulations. It seems the aggregate density and bulk of her ass is having a detrimental effect to the tidal flow of the ocean currents. True story...