Jeff Schogol, writing at Marine Corps Times, offers us an excellent testimonial to a true American warrior and patriot.

But as he told police: “If they’re looking for a fight, they came to the right guy.”

Sinke said he received at least two phone calls on Tuesday from people who screamed at him in Arabic and then hung up.

“The only words I recognized were ‘kill you,’ because I’ve heard them before,” he said. 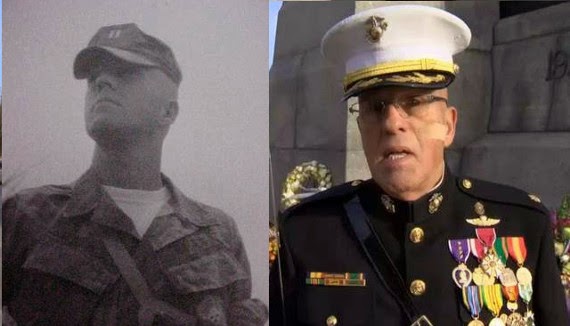 When Sinke told police about the phone calls, he added, “I promise you this: If they come here, they’ll die here.”

Sinke is a decorated veteran who did tours in Vietnam and received five Purple Hearts. When Cpl. Nathan Cirillo, a Canadian service member, was shot and killed last month while guarding Canada’s war memorial, Sinke felt obligated to honor the fallen hero.

...He also had a message for would-be terrorists: “I said, ‘Hey, you’re looking for a target, here’s a new one for you; give it your best shot; we’ll see how it works out for you.’ ”

Sinke arrived at the memorial at 6:30 a.m. and guarded the memorial alone until 9 a.m., when the Canadian honor guard and eight Canadian police officers armed with fully automatic weapons showed up, he said ... The Canadian troops were glad to see the Marine at the war memorial and allowed him to guard the northern side of the monument for the day, but the senior police officer was initially perturbed, telling Sinke he should not have been there by himself.

“He says, ‘God man, you got more balls than brains don’t you?’ ” Sinke said. “So I said, ‘Well actually, sir, I was kind of hoping that one of those scum-of-the-earth radicals would show up and take me on because, to tell you the truth, I have always dreamed of being able to confront an evil-doer and run him through with this damn sword.’ So he kind of liked that, you know.”

I want to buy this man ammunition.

It was probably Valerie Jarrett, disguising her voice.