Among the country’s largest cities, Chicago’s per-capita pension debt is unmatched — in a bad way. Check out the chart below to see just how much pension debt each person in Chicago is shouldering compared to other large cities. 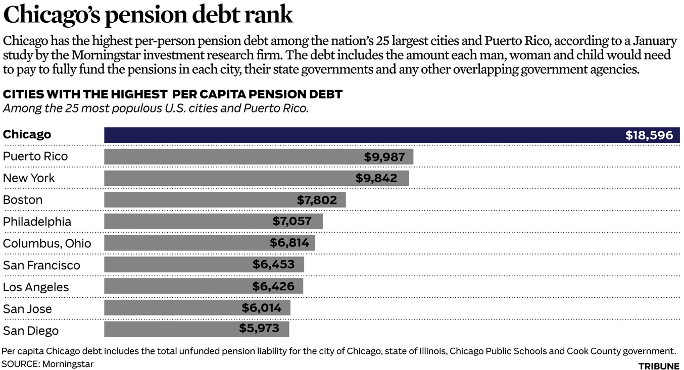 Here’s how Chicago’s unfunded liabilities broke down by system as of 2012, according to the city’s website:

Read more Ted Ballantine at Pension360. A few states consistently pop up as having the most pension debt. Hawaii isn’t always on that list. But it should be. Read… Hawaii: Fiscal “Sinkhole State”

I love these kind of stories, because I always ask the same question that nobody seems to be able to answer:

How much of this pension liability needs to be paid RIGHT NOW? or in the next 5 years? 10 years? 20 years?

Seems to me the only concern is the INCREMENTAL portion of the total liability which must be paid in the short term, and whether the city has the revenue to pay it: If they don't, then throw the panic switch - otherwise, it's simply sensationalism.