PASS THE POPCORN, NAHANNI: Politico reports that Democrat Leaders are Lashing Out at "Stretch" Pelosi

"Stretch" being the nickname bestowed upon the Baroness of Botox by none other than Mark Levin. And it's the sobriquet she prefers, I hear. Say, Nahanni, could you pass the melted butter, too?

The discontent with Nancy Pelosi is breaking out in the open... Democrats in the House have quietly grumbled about Pelosi since suffering devastating losses on Election Day, but there is a growing number of members willing to go public on their party leaders. 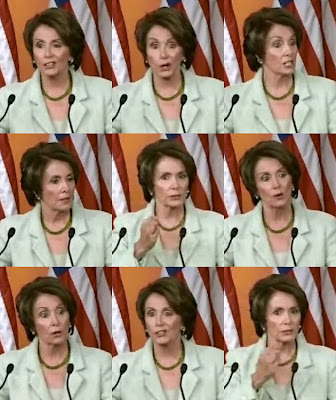 And it seems so disconcerting for Democrats to have lost faith in a pathetic old leftist whose signature achievement is warbling "We have to pass the bill to find out what's in it" like Katherine Hepburn.

The 74-year-old Pelosi’s hold on power seems secure, but buy-in from her conference is shaken... “When any party suffers two comprehensive midterm defeats, as we did, you’re going to have soul-searching and you’re going to have finger-pointing and I think that’s natural,” added Rep. Gerry Connolly (D-Va.) “I would hope that we will create a mechanism for rational analysis of what went wrong and why and what we can do to take correct measures to be successful in 2016 and beyond.”

Connolly and other lawmakers had suggested that the next DCCC chairman be elected by rank-and-file members, instead of being handpicked by Pelosi...

I like the phrase "a mechanism for rational analysis." Of course, "rational analysis" being a known strength of a political party that rejects logic, reason, and all of human history.

Pelosi even told POLITICO that she might have thought about retiring if Democrats had won the House, but she needs to stay all the more because the party lost seats. That comment caused some eyes to roll in Democratic circles.

“If we had lost 30 or 40 seats, rather than the dozen we lost, then [Pelosi] would have said she’s never leaving,” joked one Democrat, speaking on condition of anonymity. “If we keep losing seats, she’ll be here until she’s 90.”

Well, this calls for another face-lift, eh, Stretch?

...[Outgoing Democrat Congressional Campaign Committee Chairman Steve] Israel also has started to try to stem frustrations from Democratic donors, who are upset with the elections. The New York Democrat held a conference call last Thursday to talk about the midterm results. Not everybody’s concerns have been quelled. Several Democratic lobbyists, who cut large contributions to the party committee and to candidates and lawmakers, said Pelosi and the DCCC in the 2016 cycle will have to make the case that they have a credible plan in place before they open their checkbooks again.

Some Democrats privately complained that Israel told rank-and-file lawmakers last week that he couldn’t tell them how bad things were across the country before the election, although Israel vehemently denied that accusation.

Geez, Nahanni! You finished the popcorn? Where'd you hide the Twizzlers?

Crazy Nancy has turned out to be a gift to the GOP.

May she keep opening her mouth.

So many of these career politicians live in a cloistered shell. In Nancy's case... a nut shell.

It's obvious she is not mentally stable.Unfortunately, America is still at the mall.

What is it with her, Obama, Wasserman and some others who spew lies thinking people believe them?

Sadly too many stupid voters believe them.

CNS.com has a audio console (unlistened)/transcript (read), of Missouri Gov. talking about plans/preparation. In place, ahead of the grand jury announce in Ferguson.

The Gov does a waffle dance, on who really is in charge, of the whole shebang (America schtupped in de arse).

More a confirm, that Khalid Sheik Obama IS pulling the strings .... of hellfire conflagration yet to be.

Popcorn recommended for the cynics (of course).

Me, though, find no joy. Watching America burn.

Yeah, they're so unhappy with her they just voted her back in as minority leader.