The tireless Jeff Dunetz has broken another intriguing scoop regarding Donald J. Trump's impressive talent as a world-class lying bully.

Trump’s campaign manager told Joe Scarborough that Ms. Jacobus had begged him for a job. Trump tweeted out the lie after Jacobus appeared on Don Lemon’s program on CNN Tuesday evening...

...Because of her political opposition to Trump, since that first story ... Cheri Jacobus’ twitter feed ... has been barraged with tweets from Trump supporters that were nothing short of vile. Many of them accused her of begging Trump for a job and turning on him because she was rejected. That is a falsehood that I confirmed on Wednesday morning.

Today I had the chance to speak to Jim Dornan on the phone. Dornan is Jacobus’ “old friend” who was reported in the Jan 27th article as asking her to join the Trump effort. I had sent Dornan an email with Facebook conversations he had with Jacobus. They had been sent to my by the political consultant and I asked him to verify their truth... 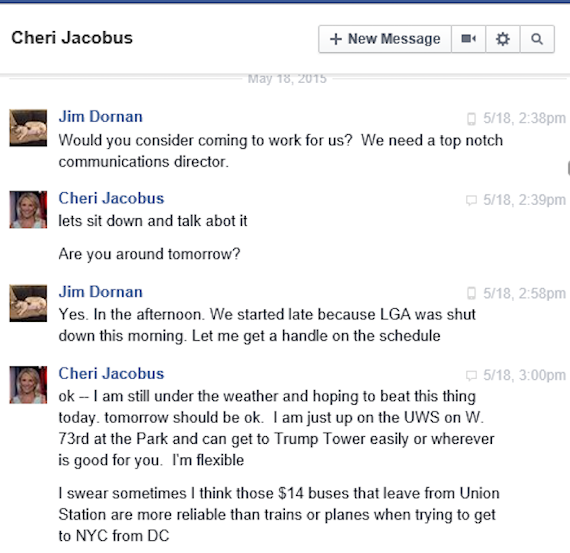 ...Mr. Dornan confirmed both the screen shot above and the typed version of the May 19th messages.

In short, Trump and his surrogates are simply lying. And for what?

And is this really what some people believe is "presidential" behavior?

Is this the seventh grade or an election in which the security of our Constitutional Republic hangs in the balance? Or should I check Trump's Instagram account for answers to this question?