Leadership: An administration that views climate change as a greater threat than terrorism blames its most recent foolish comments on cable news and poor word choice. Will Brian Williams be the next press secretary? 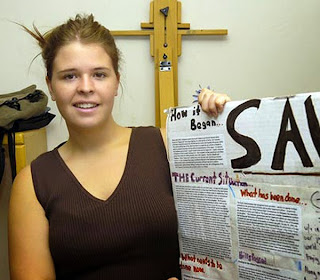 According to President Obama, Secretary of State John Kerry and White House press secretary Josh Earnest, 26-year-old humanitarian worker Kayla Mueller was killed by global warming, not by an Islamic State that beheads and incinerates those who resist its barbarism.

In trying to explain Obama's remarks on climate change and terrorism, Earnest told the Vox website, "The point that the president is making is that there are many more people on an annual basis who have to confront the direct impact on their lives of climate change, or of the spread of a disease, than of terrorism."

Sorry, but we're all feeling the direct impact of terrorism on the life of Mueller, her friends and her family. We're also feeling it on the lives of the four Jews killed in a kosher market in Paris, lives dismissed by President Obama as "a bunch of folks in a deli" who were shot at "random" and just happened to be in the wrong place at the wrong time.

Earnest blamed the controversy on Obama's choice of an adverb. But we're not as insensitive or callous as a president who thinks his job is like running a big city. Perhaps he had Detroit in mind.

In his mind, and that of his administration, the terrorist attack at Benghazi was so long ago as to be old news. But the Crusades, conducted centuries ago in response to centuries of Islamic conquest and barbarism, is the reason the Islamic State burned a Jordanian pilot alive, and an example of the evils Christians have committed in the name of Christ.

We still don't know what Obama was doing the night that — dare we say it? — Islamic terrorists attacked our diplomatic mission in Benghazi and killed Ambassador Chris Stevens, diplomat Sean Smith, and former Navy SEALs Glen Doherty and Ty Woods. But we do know Obama took off the next morning for a fundraiser in Las Vegas as the Benghazi ashes were still smoldering.

After the attacks on that kosher market and the offices of the French satirical magazine Charlie Hebdo, Obama didn't have time to join other world leaders in a moving protest march in the streets of Paris. He did, however, have time to watch an NFL playoff game and to welcome the NBA basketball champions San Antonio Spurs to the White House.

Moments after issuing a perfunctory condemnation of the Islamic State's beheading of American journalist James Foley, Obama was on a golf course.

The realities of dealing with Islamic terrorism, a term that does not cross his lips, cannot be allowed to disturb a president who is contemplating the threat of climate change as he works to correct his slice.

This is a president as delusional as Brian Williams and as much a liar. Williams lied about his experiences in moments of crisis; Obama lies about his policies and promises while deluding himself about the realities of the dangers we face and he callously ignores.

So we shouldn't be surprised when Obama tells Vox the coverage of "the problems of terrorism" is the cable news "equivalent when it comes to covering international affairs" of the local news cliché that "if it bleeds, it leads." This emperor has no clothes — film at 11.

While I think O'Bungler is useless at best, in this case his procrastination turned out for the best.

Also, though I'm puzzled by Islamofascists killing those who love them, I'm not unhappy about it.