How many people are alive because one man ignored Sonic's request to leave his handgun at home? 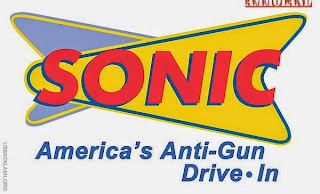 On February 8 2015, a customer who ignored Sonic’s request that “customers refrain from bringing guns to the restaurant” was able to pull his gun and shoot one of three alleged armed robbers, killing him and stopping the would-be robbery.

I previously reported that on May 30, 2014, Sonic asked law-abiding citizens to come to the restaurant unarmed. We also reported that a Sonic in Topeka, Kansas, was robbed the very day that customers were asked to come and eat while defenseless.

But on February 8 2015, the tables were turned. Atlanta’s NBC 11 reports that 23-year-old Joseph Toombs “was waiting in line at the drive-thru [in DeKalb County, Georgia,] when he saw three suspects approach him on foot.” Toombs alleges that “at least one of the suspects” had a gun.

Toombs then drew the gun he’d brought with him and opened fire, striking and killing one of the suspects–19-year-old Kenneth Brayboy. The other two suspects immediately fled and are still at large.

Domino’s Pizza has no firearms rule for its delivery employees, and as I previously reported, a Domino’s delivery woman was forced to drive to a secondary location and was raped, then robbed, in broad daylight on February 8 2015.

Gun-free policies invite trouble from those who prefer their victims be unarmed. Businesses can show honor for their patrons and employees by recognizing their right to self-defense.