Anthony Watts relays this stunning photograph from NASA (yes, the same group fully invested in promoting the global warming fraud) that illustrates the record freeze currently embracing most of the United States. 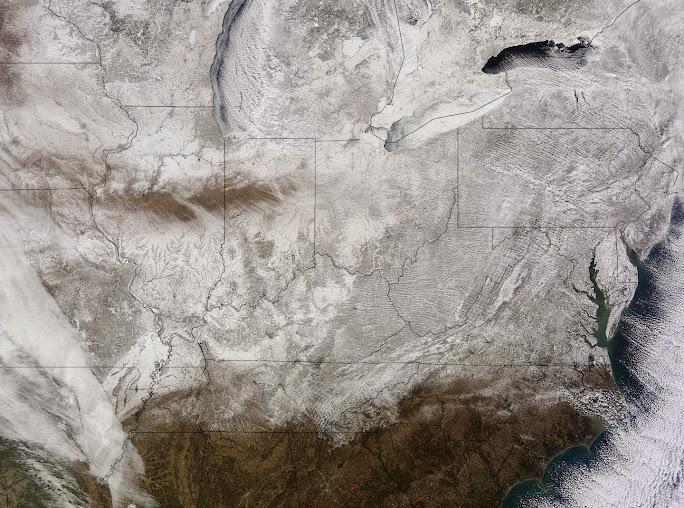 NASA’s Terra satellite captured an image of the snow-covered eastern U.S. that looks like the states have been sitting in a freezer. In addition to the snow cover, Arctic and Siberian air masses have settled in over the Eastern U.S. triggering many record low temperatures in many states.

On Feb. 19 at 16:40 UTC (11:40 a.m. EST), the Moderate Resolution Imaging Spectroradiometer (MODIS) instrument that flies aboard NASA’s Terra satellite captured a picture of the snowy landscape. The snow cover combined with the frosty air mass made the eastern U.S. feel like the inside of freezer. The MODIS image was created at NASA’s Goddard Space Flight Center in Greenbelt, Maryland.

If anthropogenic global warming happened to be true (hint: it's not), it would be a good thing since it appears we face a new and impending Ice Age.

global cooling has been predicted since the 1960's. It changed to warming since the elite could not make any money on cooling ! And it is the same thing that has been going on for eons: Climate Change, a natural phenomena.

So if it rains during a drought then the drought isn't real?
With a third grade education one knows the difference between weather and climate.
Go tell the Pentagon they are a bunch of left wing environmental whacks. They are planning and spending like crazy to make sure they are prepared for continued climate change.

Under Obama, NASA has been converted to an Islamic outreach agency, so what the DOD does around climate is about as meaningful.

Warming is a scam, as has demonstrated over and over again. Click the link and read it.

Climate change is real. It's been happening for eons and it will continue to happen till the planet dies. What has NOT BEEN PROVEN in the slightest is that humans and our activities are the cause.....or even a minor factor. ALL the CO2 humans pit I to the atmosphere in a year is easily surpassedmby a large volcano becoming active. The sun can change it's output on a nearly imperceptible level and the amount of energy that reaches the earth can change a great deal....enough to melt the polar ice or send us into an ice age. EVERYTHING we are experiencing has happenedninnthe past ajdnhumans were damn sure not the cause.....and logic dictates that what caused the drought which lowered LakemTahoe by 200 feet a millennia ago is now causing the California drought just as every other climate phenomenon we see has happened before due to natural causes. The same causes that are likely responsible now for the climate changes we witness. Humans are not like fleas on a dog in relation to the planet. We are more like dirt on the dog.....we exist but we don't materially alter the dog. But the power brokers in charge aren't about to let reality interfere with an excuse to size control over the everyday life of EVERYONE and also get filthy effing rich in the process. And they are aided by that massive numbers of useful morons who believe the BS they produce.