Lies: Investigative reporter Sharyl Attkisson reminds us the secretary of state who blamed Benghazi on a video once made up a story about courage under fire in Bosnia. Maybe Brian Williams can be her 2016 running mate.

'Nothing in life," Winston Churchill once famously said, "is so exhilarating as to be shot at without result," except perhaps in the minds of network anchors like NBC's Brian Williams and political candidates such as Hillary Clinton, who also claimed a brush with death in a war zone on her resume. Perhaps they can swap war stories. 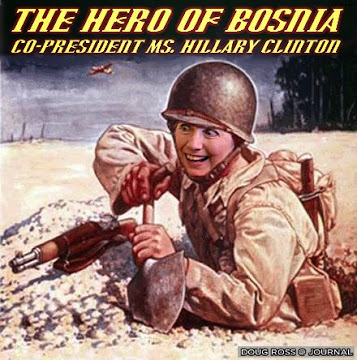 Former CBS reporter Sharyl Attkisson reminded the world of Hillary's tale of heroism in an interview with CBS Philadelphia affiliate WPHT morning host Chris Stigall last November, a tale told by the former first lady in her 2008 run against one Barack Obama.

"I had come home from an overseas trip vacation, and my husband says, 'When you went to Bosnia 12 years ago with the first lady, were you shot at?,' and I'm like, 'No, I think I would know if I were shot at,'" Attkisson told Stigall of the 1996 trip to Bosnia with Hillary, first daughter Chelsea and celebrities Sinbad and Sheryl Crow.

Candidate Clinton claimed in a 2008 speech in Washington and several subsequent interviews that she and Chelsea were forced to run for cover under hostile fire shortly after landing in Tuzla, Bosnia.

"I remember landing under sniper fire," Clinton said. "There was supposed to be some kind of greeting ceremony at the airport, but instead we just ran with our heads down to get into the vehicles to get to our base."

Her harrowing tale never happened, and Mrs. Clinton's faulty memory also forgot that there was a reporter on the trip who was taking notes and had a video of the event.

"The video showed," Attkisson said, "and I thought this was a pretty good way to explain it — I put her in a box saying, 'We got off the plane and had to duck and run for cover and there was sniper fire' and then I show the video of what was really happening, and she's getting off the plane and she's waving, shaking hands with a little school girl."

In a way, Hillary recanted her tale, saying she had a "different memory" of the event, something akin to Brian Williams claiming that the "fog of memory" had clouded his recollection. Perhaps he should have taken notes like a good reporter like Sharyl Attkisson.

As she campaigned for the April 22, 2008, Pennsylvania primary, Hillary told a Pittsburgh radio station, "I have written about this and described it in many different settings, and I did misspeak the other day. This has been a very long campaign. Occasionally, I am a human being like everybody else."

Human beings, as Churchill reminds us, remember getting shot at.

Many have called for Williams, who covered the Hillary Bosnia lie, to exit the media stage in the same ignominious way CBS anchor Dan Rather did after fabricating a story about President George W. Bush's serving in the Air National Guard to avoid going to Vietnam.

Shouldn't we expect the same standards of honesty to disqualify Hillary Clinton from being president and following President Barack "You Can Keep Your Plan" Obama?

Clinton has a problem with the truth. She once claimed she was named after Edmund Hillary, who climbed to Mount Everest's summit nearly six years after her birth.

She has told other whoppers, but the most famous one was a lie agreed upon in the administration that the Benghazi terrorist attack was a spontaneous demonstration that went rogue because of an inflammatory video.

We don't need any more liars, whether they cover the White House or serve in it.