Costs for schooling a surging number of limited English proficiency students are soaring — $2.5 billion in the Washington, D.C., region alone. But the federal government, responsible for the influx of immigrants, is ducking the bill. 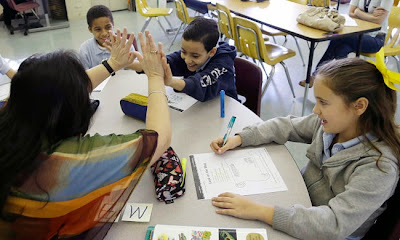 A new study by the Federation for American Immigration Reform found that taxpayers in the District of Columbia, Maryland and Virginia are incurring budget-busting costs to accommodate a rising tide of English-deficient pupils, most of them first-generation immigrants.

Alexandria, Va., for example, is spending $25,538 per LEP student. With 4,183 such students enrolled this year, the city’s school district is paying out $107,719,214 for those LEP pupils — a whopping 45.8 percent of the district’s annual instructional budget.

The ranks of LEP students, many of whom come from households where no English is spoken, have jumped 125 percent in the Northern Virginia city since the 2005-2006 school year.

Similar increases are found in neighboring Fairfax and Arlington counties, as well as in D.C. and its Maryland suburbs.

Because LEP students require more intensive and specialized services, district outlays for them run 40 to 50 percent higher than for non-LEP students. And because the federal government is not reimbursing for the rising costs, local school districts and their counties are diverting funds from other programs, says Eric Ruark, director of research for FAIR.

Dan Stein, president of FAIR, said, “The children shortchanged by the money being siphoned to provide for the needs of the LEP population are most often those from disadvantaged communities where educational resources are already strained.”

The federal government isn’t lifting a finger to clean up the mess it made in its backyard. In Washington, D.C., — where 9,389 LEP students account for nearly 20 percent of the school budget — the feds funded just 3.5 percent of the local district’s education costs. In Alexandria, the federal share is less than 0.5 percent.

“The negative impact on schools is being compounded by conscious decisions by the Obama administration to encourage and reward illegal immigration,” Stein noted. “Unfortunately, for families living in the Washington metro area who cannot afford the $36,264 tuition to send their kids to the Sidwell Friends School, educational interests are being sacrificed by the policies of this administration.”

Kenric Ward is a national reporter for Watchdog.org and chief of its Virginia Bureau. Contact him at (571) 319-9824. @Kenricward