According to a recent poll by AP-GfK [PDF], President Obama currently has a 47 percent job approval rating, up from 41 percent in December. Fifty-one percent of Americans approve of Obama’s handling of the unemployment issue, compared with 44 percent before, while 45 percent approve of his handling of the economy overall, up from 41 percent in December. 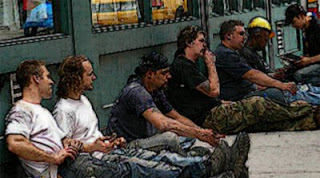 These numbers track with the declining unemployment rate and optimistic newscasts that followed the publication of the most recent unemployment statistics, but do not reflect actual economic conditions. In fact, a closer look at the poll itself reveals that people have grave reservations about the economy—reservations that are reflected in a number of economic statistics not covered in published reports.

The overall unemployment rate has been on the decline since the trough of the recession in 2010 (see Chart 1. below); however this paints a very deceiving picture. Were it indicative of a true economic recovery, other indicators would show similarly positive results. But this is not the case. For example enrollment in food stamps has grown 65 percent since President Obama took office, from 28 million in 2008, to 46 million today. Despite a small decline in 2014, food stamp use has been at its highest levels in recorded history—magnitudes higher than any previous time. Over 46 million people, equal to about 30 percent of the civilian labor force, now use food stamps.

Chart 2 shows the number of people working part time for economic reasons. Workers in this category are defined by the Bureau of Labor statistics as being part timers due to slack work, poor business conditions, or only being able to find a part-time job. These people would work full-time if the opportunity were available. While these numbers have come down somewhat, they remain at the highest level in recorded history.

The overall civilian unemployment rate does not account for these part-timers. It also does not consider those marginally attached to the labor force. This includes the so-called “discouraged workers,”—i.e. people who have given up looking for work in the past year because they do not believe they will find a job—and others who are unemployed as a result of work slowdowns or temporary layoffs.

When these groups are included, a much more troublesome picture emerges. As of January 2015, this unemployment rate stands at 11.3 percent. This is the real unemployment rate, and is the lowest it has been since October 2008. It reached an unprecedented high of over 17 percent in 2010. The last and only time the rate went over 11 percent was in early 1994. (See chart 3.)

The civilian labor force participation rate measures the percentage of those among the population who are working or actively seeking work. In measuring this rate, the most important demographic is 25 to 54 year-olds. Younger people often leave the labor force to attend college, and as the baby boom generation reaches retirement age, older folks are retiring at an increasing rate, thus the absence of these groups may not directly reflect economic conditions. This rate reached an all-time high of 84.6 percent in 1999. It fell substantially following 9-11 but began to recover during the later Bush years. Since the end of 2008 however, it has fallen precipitously with little sign of recovery.

Real (inflation adjusted) wages are also a good indication of economic conditions. Real wages have grown consistently year-over-year since the mid-1990s. For the past four years however, real wages have been flat. (See chart 5. Note: the CPI less food and energy was used to correct the wage figures for inflation. That data series removes the volatility associated with food and energy prices and is considered a better measure of underlying inflation.)

These economic statistics present a much worse picture of the economic situation than portrayed by the civilian unemployment rate taken alone. Indeed the same AP-GfK poll indicates that while Obama’s approval ratings have improved slightly, the assessment of overall economic conditions has not.

Only 35 percent of families say they have fully recovered from the recession. An almost equal number, 33 percent, say their situation has improved little or not at all. For small business owners, 46 percent said they have not recovered at all, while only 18 percent responded that their businesses had completely or mostly recovered. Thirty-nine percent of individuals said the job market in their area had not improved, while only 27 percent said it had recovered. Finally, only 38 percent believe the economy will improve in the next 12 months.

That response is unchanged from December. Fifty-nine percent believe the economy will either remain as is or get worse. In December, 61 percent believed this. So, while the media like to harp on the falling unemployment rate and Obama’s modest poll improvements, the actual poll, supported by numerous economic statistics, reveals continued widespread pessimism about the economy.

This article was written by contributors of Watchdog Arena, Franklin Center’s network of writers, bloggers, and citizen journalists.

These numbers are based on lies. That "declining unemployment rate" isn't but Obama has ballyhooed it so much people believe it.

It's all a house of cards, propped up by lies, and it will come crashing down around us.

At this point I'm 50/50 on deciding if my fellow Americans are actually this stupid VS yet another 'poll' that's every bit as honest as the election results in a banana republic.

Watching the bald-faced lies the media excretes on a regular basis I'm dubious at best.

Any job, one hour a week, now gets counted- while millions who have dropped out- do not.

Its a fucking sham, anyone that believes any government assertion at this point needs a screw tightened.