The peerless Middle East Media Research Institute, better known as MEMRI, serves up another major story certain to be ignored by our betters in legacy media. To wit: the government of one-time ally Egypt is outraged that the Obama administration is fomenting civil unrest -- again -- in that country by propping up the Nazi-aligned terror group known as the Muslim Brotherhood. 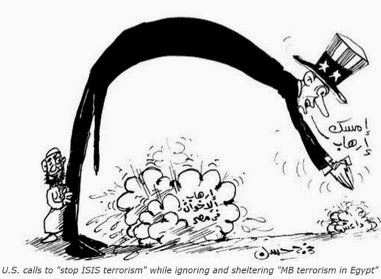 Several members of the Muslim Brotherhood (MB) recently reported on their social media accounts that a delegation of MB members had visited the U.S. State Department on January 27, 2015 and met with officials from the State Department and White House... According to the MB reports, the purpose of the meeting was to recruit support for their opposition to the 'Abd Al-Fattah Al-Sisi regime in Egypt.

On its part, the American administration was embarrassed by the publication of the visit, but openly acknowledged it a few days later. State Department Spokesperson Jen Psaki said that the MB members were part of a larger delegation that included former Egyptian MPs, among others, and that they are not currently active in the movement. She added that State Department meetings with various political elements were routine. The Egyptian regime, outraged by the visit, accused the U.S. administration of not respecting the Egyptian law that defines the MB as a terrorist organization, and of discounting the will of the Egyptian people. It also claimed that this conduct flies in the face of U.S. policy, which champions the struggle against global terrorism. Criticism of the U.S. was also voiced in the official Egyptian press and in the Saudi press.The fact that the reports on the visit coincided with the January 31 large-scale terrorist attack in Al-'Arish, in which 31 people were killed and which the Egyptian regime and media attributed to the MB, only increased the rage towards the U.S...

...The delegation's visit to the State Department was made public only when the images were posted to Facebook – embarrassing the U.S. administration. It appears that this embarrassment was also the reason for the delay in the administration's response to reporters' questions on the matter. When first asked about the affair in a daily briefing on January 27, 2015, State Department Spokeswoman Jen Psaki said that she had no details on the visit. Only two days later, when asked again, Psaki confirmed the visit, but stressed that it was not an MB delegation, but rather a delegation including former Egyptian MPs, some of whom were from the MB's Freedom and Justice Party... 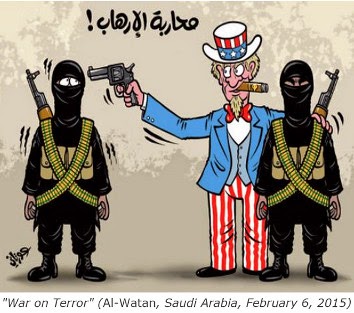 ...The Egyptian Foreign Ministry expressed outrage at the U.S. State Department's hosting of the MB delegation. At the end of the African Union summit, Egyptian Foreign Minister Sameh Shoukry addressed the State Department's explanation, saying: "I do not understand [the State Department's] claims. We do not understand the existence of such ties with elements that are involved in terrorist activists meant to terrify Egyptians." He added: "The MB movement is not a political party. Egyptian law – which should be respected, just as we respect the laws of others – defines it as a terrorist organization, based on evidence and testimony we have that indicates their involvement in terrorist actions meant to harm the lives of Egyptians, terrorize them, and threaten their security." Shoukry said further: "If we wanted to bury our heads in the sand so as not to face reality, that would be another matter. But we see very well." According to him, "terrorism is not just ISIS or Boko Haram, but rather all terrorist groups, regardless of what name they use, since they [all] champion the same ideology and the same ideas leading to death and destruction...

In other words, the entire Egyptian establishment is slamming the Obama White House for actively colluding with Islamonazis to overthrow the Al-Sisi government.