At DownTrend, Robert Gehl relays some encouraging word from Gallup.

In only three states and the District of Columbia are there more self-professed liberals than conservatives. 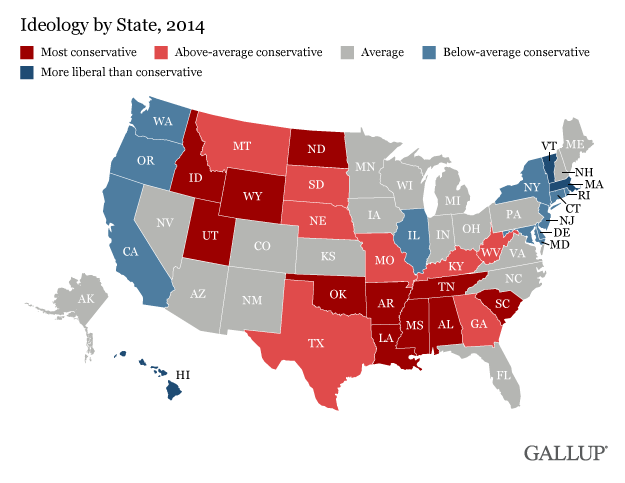 Gallup’s latest “State of the States survey shows only residents of Hawaii, Massachusetts and Vermont are more liberal than conservative. The other 47 states tilt conservative to one degree or another.

Of course, the way one identifies themselves can differ markedly from reality, where many of these states are solidly Democratic.

Nationally, only 24 percent of Americans consider themselves ideologically liberal – but that number is up eight points from 20 years ago.

Still, it’s an indication that the political label “liberal” is still considered a dirty word in American politics.

And on the less encouraging theme of "the tide is shifting", earlier today President Obama alluded to the fact that illegal immigration will drown conservatism (and by extension, America).

Which is why only a Constitutional Conservative will do in 2016. Close the borders, tear down the regulatory state, and unleash the American economy.

how can this be ?? California is run by Democrats, as is Oregon and Washington, Rhode Island, New York, Maine, New Hampshire, Vermont, Wisconsin, New Mexico, and many more...
allan allen

The problem is that the major cities like LA, NYC, Boston and Philadelphia outvote the surrounding state. Look at maps of the 2008 or 2012 elections and you see that McCain and Romney both carried a much greater proportion of the land mass of the US but that the cities where the lefties and indolent cluster, have a much greater population density and as a result they out vote the rest of the nation. I believe we're past the tipping point.

Allan Allan, Wisconsin is not run by Democrats. The state legislature is under GOP control. The governor (who has been receiving a bit of attention lately) is Scott Walker. One Senator is Republican and the other is Dem Tammy Baldwin.

10 years ago, it was much more "blue." You can thank the corruption, big spending, and screwups of Walker's predecessor, "Diamond Jim" Doyle for much of the rightward shift in the Badger State.

Sorry this demonstrates that Gallup is crazy. It shows far left states like Illinois as being left leaning? Minnesota as neutral? Maine as neutral? Cmon these people don't have a clue.

As encouraging as such surveys are to conservatives, I think they are misleading because many liberals call themselves "moderate".