Who could have predicted that 2,500 pages of law and 50,000 pages of regulations -- that not one person read in toto -- would turn out to be a complete cluster? 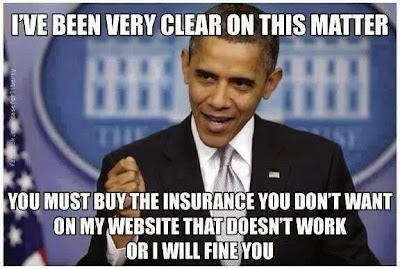 Three senior House members strongly urged the administration Monday to grant a special sign-up opportunity for uninsured taxpayers who will be facing fines under the law for the first time this year.

The three are Michigan's Sander Levin, the ranking Democrat on the Ways and Means Committee, and Democratic Reps. Jim McDermott of Washington, and Lloyd Doggett of Texas. All worked to help steer Obama's law through rancorous congressional debates from 2009-2010.

The lawmakers say they are concerned that many of their constituents will find out about the penalties after it's already too late for them to sign up for coverage, since open enrollment ended Sunday.

That means they could wind up uninsured for another year, only to owe substantially higher fines in 2016. The fines are collected through the income tax system.

"For the many families who may now be about to pay a penalty, there should be an opportunity to avoid both further penalties and to obtain affordable health insurance," said Doggett.

The whole point of the tax-penalty-fee-fine was to force people into the program so that Obamacare wouldn't collapse under its own weight.

And now the Democrats are concerned?

Too late, dipsticks. Next time try reading the damn bill before you pass it.

Obamacare is nothing other than government fleecing taxpayers on behalf of the health industry for the millions upon millions of job and insurance coverage losses that occurred in 2008.

If the Dems had really been interested in helping the poor uninsured, they could have passed a bill that addressed only these people. Instead, the Democrats insisted on passing Obamacare which put the government in control of every American's healthcare and in control of 1/5 of the American economy. They insisted on passing Obamacare when the AVERAGE of all polls indicated that 87% of Americans were satisfied with their healthcare. They told lies after lies to the American people as revealed by Dr Jonathan Gruber of MIT. If you have not seen the Gruber videos yet, please watch them. Gruber (who worked closely with the White House on Obamacare) says that Obama and the Democrats were able to sell Obamacare because of the "stupidity of the American people" and because of "the ignorance of the American people about basic economics."

BS...they deserve to pay the penalty for voting for communists. I do believe that all registered Republicans should get a waiver though.

I'm sure millions of Americans are thinking something like, "I voted for Obama because he said that he was going to make somebody else pay my medical bills. But now he's saying that I'm supposed to pay someone else's bills? That's not fair!"