THIS CHART TELLS THE STORY: The Middle Class Thrived After World War II... Until Obama

The Davos World Economic Summit has long been a parade for the insider agenda, putting the power players’ plans for the world’s economies on display as a preview to their playing out for the rest of the year.

But so far, the 2015 elite retreat in the Swiss Alps has proven to be full of apprehension, and even horror… with many of its own members expressing regret at the world they have built. 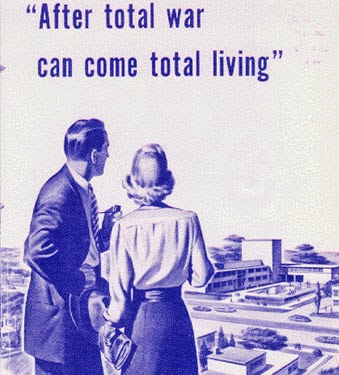 The billionaires and corporate oligarchs meeting in Davos this week are getting worried about inequality… even the architects of the crisis-ridden international economic order are starting to see the dangers. It’s not just the maverick hedge-funder George Soros, who likes to describe himself as a class traitor. Paul Polman, Unilever chief executive, frets about the “capitalist threat to capitalism”. Christine Lagarde, the IMF managing director, fears capitalism might indeed carry Marx’s “seeds of its own destruction” and warns that something needs to be done.

The scale of the crisis has been laid out for them by the charity Oxfam. Just 80 individuals now have the same net wealth as 3.5 billion people – half the entire global population. Last year, the best-off 1% owned 48% of the world’s wealth, up from 44% five years ago. On current trends, the richest 1% will have pocketed more than the other 99% put together next year. The 0.1% have been doing even better, quadrupling their share of US income since the 1980s.

These billionaires are not concerned with a fair or truly equitable world, of course. But they may well be concerned about having pushed the system beyond the brink, and triggering global collapse or unrest as a result of things gone way too far.

On top of a bloated super-surveillance police state that is still expanding in the age of Big Data and continuing terrorism, it is a “wealth grab on a grotesque scale” that has stood out the most in 2015.

In 2015, it has become obvious that inequality has become just plain cynical, unsettling and, perhaps, downright revolutionary… and even the insulated, egocentric billionaires have taken notice.

Meanwhile, the Telegraph compiled a set of compelling reasons to think the world has fallen back into crisis, with a global economic meltdown perhaps looming overhead.

Charts compiled from 2014 data showed gloomy numbers in everything from stunted growth, mounting deflation, collapsing oil prices (and with it a collapsing Russian economy), conspicuously low central bank interest rates, mounting debt in Europe and the UK, new waves of the Euro-crises in Greece, Italy and Spain, and shortcomings in previous forecasts for growth by the IMF.

In short… well, things are not looking so great.

Along with the other factors mentioned above, this chart, published by the London Telegraph, shows what has happened to Americans as they struggled to tread water and keep afloat after 2008. For the United States, there have been some signs of improvement, but mostly for those already on top. And the general decline in the global rankings of economic freedom and civil liberties does not complement the widening inequality, either. 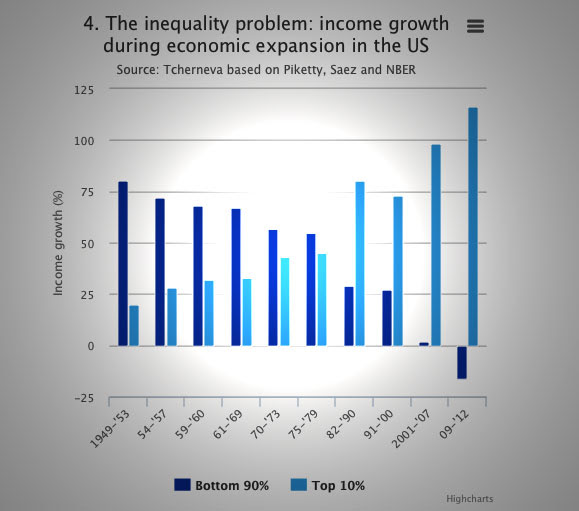 As Neil Irwin reported for the NY Times:

Who benefits from rising incomes in an expansion has changed drastically over the last 60 years. Pavlina R. Tcherneva, an economist at Bard College, created a chart that vividly shows how.

Back in the 1940s, ’50s and ’60s, most of the income gains experienced during expansions — the periods from the trough of one recession until the onset of another — accrued to most of the people. That is to say, the bottom 90 percent of earners captured at least a majority of the rise in income. 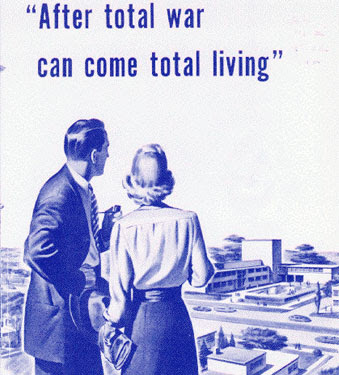 Post-WWII and the Burgeoning Middle Class

It’s not that things were ever perfect, but… here’s a glimpse into how most Americans – the “average” American in the middle or lower class was doing, overall, half a century or so ago. With a strong manufacturing and industrial sector, many had the opportunity for a good paying job, a home and some semblance of upward mobility. Not all was rosy, but by the numbers, things were on an even enough keel.

In short, the chart begins in 1949, when the income growth for most Americans outweighed that of the top 10% by a factor of four to one.

During those years, most Americans steadily enjoyed relatively high wages and general prosperity. 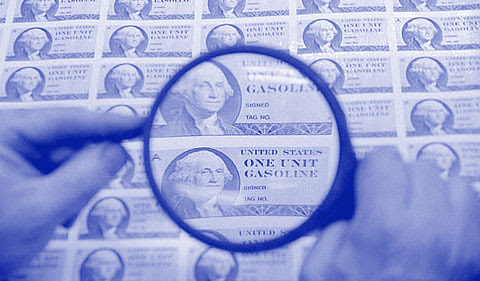 Energy Crisis and Stagflation of the 1970s

The 1970s represented a turning point, however, with several stages of the oil crisis hitting in 1973 and 1979. Foreign policy led to OPEC hiking energy prices; Americans in turn saw rationing and a rise in the cost of living; middle class wealth and job opportunity took a dive.

The beginning of deindustrialization meant that, more and more, Americans weren’t producing actual goods; manufacturing was in decline, and many good jobs were soon shipped over seas.

Meanwhile, wealth on a global stage flowed through the petrodollar, which was, in turn, recycled on Wall Street, making speculators and banking houses – not good and production – the center of the economic universe. 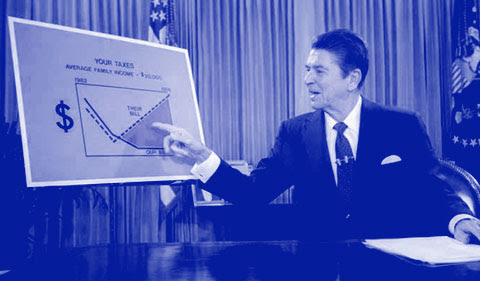 Deregulation and Unfettered Speculation in the 1980s and 1990s

Thus, the increases in income as wealth changed dramatically in the following decades, starting in the year 1982 and continuing to 2000 and the end of the century.

During the presidencies of Republicans Ronald Reagan and George Bush and Democrat Bill Clinton, income growth patterns flipped from their post-war patterns, with the top 10% suddenly outpacing everyone nearly 3-to-1, and regular folks seeing a noticeable decrease in their earnings.

In short, the middle class in decline. And things were getting even worse for those at the bottom.

The deregulation atmosphere of the 80s represented a complete upheaval of the post-war middle class boom.

As Wall Street’s predatory capitalism became the law of the land, a full 80% of income growth went to those at the top, while middle and lower class wealth suddenly staggered to a 29% share.

The 90s continued this trend, with income growth for the bottom 90% dropping to 27%.

This fast-paced era of “free market” (crony) capitalism – as defined and enhanced by Wall Street – only set the stage for what was to come, however. 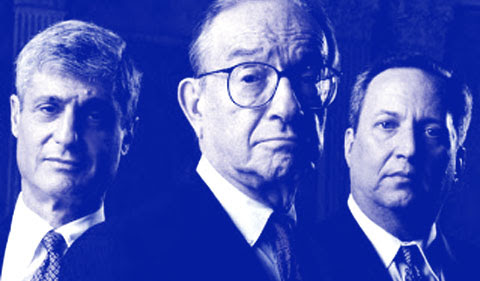 The Walls Come Down: End of Glass Steagall and Rise of Derivatives Intro 21st Century

For those looking back after the 2008 financial collapse, these are the years in which the Glass Steagall Act, which had separated commercial and investment banking since the 1930s, was repealed with the handiwork of Clinton’s Treasury Secretary Robert Rubin and Larry Summers, Rubin’s deputy and successor.

Meanwhile, since the mid-90s, the derivatives market was opened up for big business, despite the warnings of such regulators as Brooksley Born, then head of the Commodity Futures Trading Commission (CFTC).

Under these important developments, the cynical years of the George W. Bush presidency – initiated by a Supreme Court decision, and not by the electoral process – became even worse.

Income growth for most people ground to a halt, with the total income growth for the lower and middle classes reaching only 2% (meaning most had no meaningful rise in income at all).

Meanwhile, income growth for the top 10% soared to 98% of all increases. America’s richest took it straight to the bank, in an era of massive speculation during a huge housing bubble that would soon come crashing down.

Much has been said about the 2008 financial crisis, but the “too big to fail” banks were signposts for an opportunistic class of Americans who had profited by their own rules when opportunity was dwindling for most people.

After the brink, when taxpayers bailed out the banks, things became even worse for average Americans who found themselves in the so-called “bottom 90%.”

During the Obama years, when many Americans perceived America’s first black president as redistributing vast amounts of wealth to the lower classes, income dropped sharply, with negative growth for 90% of Americans for the first time since World War II.

There was no such leveling out, but a sharpening of the growing disparity nationwide. Obama is a corporatist, not a socialist.

During the period since 2009, when most Americans saw an average drop of 16% in income, the top 10% increased their wealth by a mind-boggling 116%. Their earnings more than doubled, while the average population struggled with less and less. Things reached a point of total us vs. them…

The Occupy Wall Street crowd called it the 1%, but it is much worse than that. The issue is a tiny, tiny few (numbering only a few thousand) who now effectively own it all.

They make the rules, they break the rules, and, well, they just rule. Period. 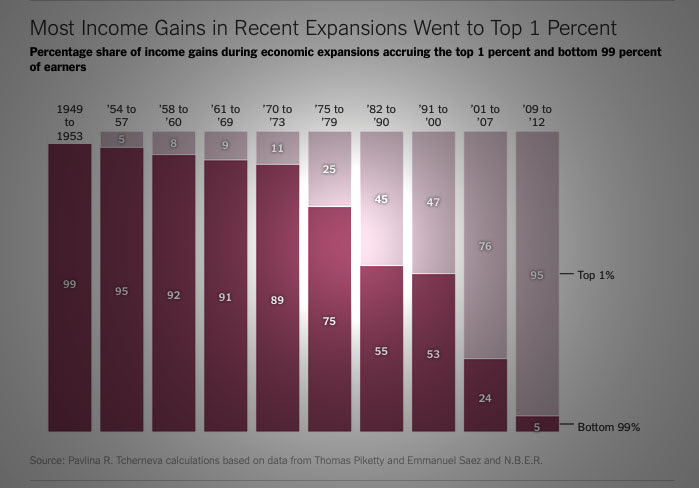 Could the picture be any clearer?

This video shows how America’s perception of the wealth gap underplays the reality, and compounds the problems, and further reveals that in reality, the bottom 40% in the United States have, well, next to nothing to show for themselves in terms of economic wealth:

As for the Middle Class – currently dead, in limbo or alternately M.I.A., columnist Harold Meyerson argues:

The extinction of a large and vibrant American middle class isn’t ordained by the laws of either economics or physics. Many of the impediments to creating anew a broadly prosperous America are ultimately political creations that are susceptible to political remedy. Amassing the power to secure those remedies will require an extraordinary, sustained, and heroic political mobilization. Americans will have to transform their anxiety into indignation and direct that indignation to the task of reclaiming their stake in the nation’s future.

Perhaps that means the Middle Class could be once again revived, if ever sanity reentered the picture, if the bums were kicked out and those guilty of outright treason in the financial and political arenas were finally rounded up and held accountable.

But don’t hold your breath… just hold onto what you’ve got, if you can.

Would you be interested in a reciprocal Link Exchange with Common Cents?