Jihad Enclaves: With names like Islamberg and Mahmoudberg, some 22 of what the FBI calls "enclaves" have been established across the U.S. by a group linked to a Pakistani militant group called Jamaat ul-Fuqra. 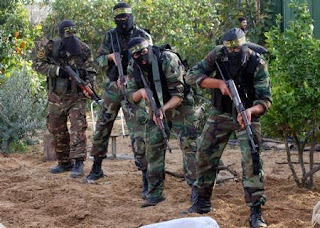 The specter of 21 Christians being murdered "on the shores of Tripoli" in Libya where U.S. Marines first encountered Muslim forces — the Barbary pirates — and threats by the Islamic State against Rome show how President Obama's "JV team" has metastasized as a global threat.

And, yes, it can happen here.

The Islamic State is encouraging attacks on infidels in the West like the one in Moore, Okla., where office worker Colleen Hufford was stabbed and beheaded.

Lost in the debate about the threat of Islamic terrorism is that the "home-grown" and "lone wolf" terrorists IS seeks to enlist already walk among us.

They may find aid and comfort in a network of what might be called training camps established by a group called Muslims of the Americas (MOA), a group that has been linked to the Pakistani militant group Jamaatul-Fuqra, whose members are devoted followers of Pakistani extremist cleric Mubarak Ali Gilani.

Ryan Mauro, national security analyst for the Clarion Project, a nonprofit organization that seeks to educate the public about the threat of Islamic extremism, reports, based on FBI documents the group has obtained, the existence of a 22nd MOA paramilitary training camp in Brazoria County, Texas.

Called "Mahmoudberg" by the MOA, the FBI describes it as an "enclave" and "communal living site" at least seven to 10 acres large from which gunshots, possibly from target shooting, are frequently heard.

As Mauro and the Clarion project report, a 45-acre enclave about 70 miles south of Dallas was raided in 1991 after a MOA/Jamaat ul-Fuqra bomb plot in Toronto was foiled.

Among what the feds found, Mauro reports, were four mobile homes, three military general-purpose tents, as well as loose ammunition, weaponry, books on counterterrorism techniques and surveillance photos of the Greenhead Station in Los Angeles, suggesting it was the site of a planned attack.

A 2007 FBI report notes that MOA members have been involved in a minimum of 10 murders, one disappearance, three fire bombings and a fourth attempted fire bombing, two explosive bombings with one more attempted.

These are not summer camps.

"The documented propensity of this organization for violence," the FBI report states, "supports the belief the leadership of the MOA extols membership to pursue a policy of jihad or holy war against individuals and groups which it views as enemies of Islam, which includes the U.S. government."

The FBI report also states that the "MOA is now an autonomous organization which possesses an infrastructure capable of planning and mounting terrorist campaigns overseas and within the U.S."

That infrastructure and the types of individuals involved provide a potential ready-made network in the U.S. for the Islamic State to use.

So why isn't the MOA listed by the State Department as a terrorist organization?

Conservative blogger Pamela Geller, who has kept an eye on these jihadist camps since 2007, suggests "there is a great reluctance among government and law enforcement agencies across the board, no matter who is president, to appear to be anti-Muslim."

It is the same thought process that caused New York Mayor Bill De Blasio to call off monitoring police of area mosques. It is the thought process embraced by President Obama, one that is putting us in grave danger.

Actually, they're exclaves: pockets of political divergence from the region that completely surrounds them. (Never let anyone tell you that Islam is a "religion.")

Oh yeah? If these were survivalist or Christian enclaves, the Lame Street Media will be screaming about it. But Islamic? No big deal.

Did anyone else notice the guy in the background smiling...and these soldiers just pose for the camera. ..?fake picture